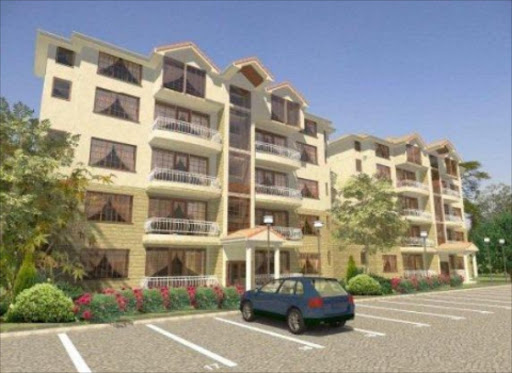 PARTNERSHIP: An artistic of apartments at Precious Gardens Riruta, one of HF's joint ventures. Photo/COURTESY

Kenya Building Society’s executive director James Karanja, who has been HF’s general manager for project financing, said the building arm has “a number of joint ventures in the pipeline”.

“We expect to land at least three joint ventures in 2014, which will be much bigger than the ones we are into so far,” Karanja said.

A joint venture is an business arrangement in which parties agree to pool resources towards a goal – with equal responsibilities for profits, losses and costs – through a special purpose vehicle.

KBS is in discussion with potential joint venture partners, with one in Nairobi’s Komarock and others in Nakuru and Kisumu being most likely to fruition. Karanja said the firm will release details in due course.

Since its revival last year after a 13-year dormancy, KBS has entered into two joint ventures – one in Riruta and the latest in Kahawa Sukari, Kiambu county – worth Sh1.2 billion and Sh1.5 billion respectively.

In Riruta, the joint venture is building 328 units of one- to three-bedroom units dubbed Precious Gardens on a 5.4 acre parcel of land. KBS contributed Sh186 million as the equivalent of the land’s value.

The Kahawa Sukari project – in partnership with the Mbugua Kibathi family which owns Sagret Hotel in Nairobi – will deliver 220 units of two-bedroom (70 units) and three-bedroom (150 units), which will be built in 22 blocks of 10 units each.

The development sits on five acres and will have a commercial block and a kindergarten. KBS has contributed Sh105 million into the joint venture.

Construction and “other costs” will bring the total project’s worth to about Sh1.5 billion. The units are on offer for Sh5 million and Sh6 million for the two- and three-bedroom respectively.

HF’s general manager for mortgage sales David Maveke said 36 units had been sold off-plan by Thursday. A number of buyers also booked several units – as many as 10 each – in block buying when the project was unveiled, signalling a huge demand for such middle income houses in the location by both owner-occupiers and buy-to-let investors.

“The location is quite prime. You will find that those booking a block (of 10 units) each are well versed with this area and know there’s potential for huge returns,” said Frank Ireri, the group managing director.

“The larger units are quite popular with families who are buying to live-in, while many buy-to-let investors are interested with the two-bedroom units,” said Maveke.

Housing Finance will raise Sh20 billion through a bond to re-capitalise KBS and lend to homebuyers.

It is aiming to float the first tranche of between Sh5 billion and Sh10 billion in the second quarter of 2014, as it targets a single digit in interest rate pricing.