• It is feared that the pandemic relief bill may push inflation higher and in effect devalue the US dollar and the digital currency is being seen as a good inflation hedge. 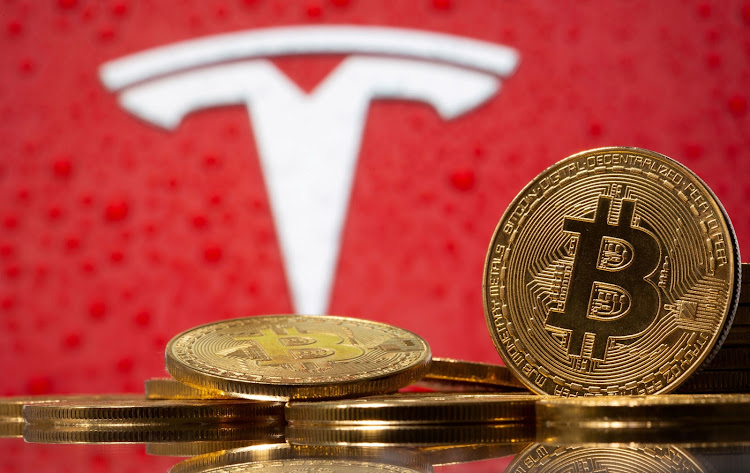 Representations of virtual currency Bitcoin are seen in front of Tesla logo in this illustration taken, February 9, 2021.
Image: REUTERS

Bitcoin has been the hot topic of discussion recently, mainly due to its price surges and an increase in institutional interest.

In 2011, Laszlo Hanyecz bought two pizzas with eight Bitcoins that were only worth mere cents then. Now, that little amount of virtual currency is close to around $480,000. That's just how much this cryptocurrency has surged, registering a value of $60,000 per coin as of Saturday.

Such a rapid surge in price is thought to be fueled by a growing number of institutional investors that are embracing this digital currency. Many also suspect that the surge has been driven by the approval of President Joe Biden's $1.9 trillion stimulus package in the US.

It is feared that the pandemic relief bill may push inflation higher and in effect devalue the US dollar and the digital currency is being seen as a good inflation hedge.

But critics and doubters warn that cryptocurrencies are a bubble waiting to burst. The money asset has a record of price swings falling sharply several times over the last few years.

In fact, Bitcoin has recorded dizzying gyrations over the course of the last 3 months. Despite this, the cryptocurrency has grown in both popularity and value, rising by almost 1000% percent over the last 12 months. The value of Bitcoin in circulation has exceeded $1 trillion dollars for the second time this year.

MasterCard, New York Mellon Bank, and other big financial companies have ventured into cryptocurrencies. Elon Musk's Tesla, which brought about $1.5 billion in Bitcoin with plans to accept payments in it as well, seems to be leading the charge. As a result of the Bitcoin buzz, other smaller cryptocurrencies such as Ethereum, Litecoin, and stellar are also registering a boost.

Why Bitcoin Is Still Going Strong

This digital currency has been on a roll since its inception back in 2009. The trajectory of Bitcoin shows an upward trend although every few years, the price has a stumble and a major one at that.

During these dip periods, many people start questioning whether this cryptocurrency will last in the long-term. However, this almost always turns out to be a false crisis as Bitcoin starts to pick up again, gathering even more steam than before.

When these booms, that take place every few years, happen, an increase in announcements by financial institutions and large companies is observed. This helps reinforce the idea that Bitcoin is being integrated into the international financial system.

The idea that was initially thought to be an utter renegade, thought to be supported only by tech mavericks and libertarians, has no doubt been successful in gaining a strong foothold, and this position is strengthened with every alignment of an institutional investor with the bitcoin narrative.

Bitcoin is still quite nascent, being only 12 years old, yet there and is already being talked about and discussed significantly in mainstream media. The properties, working and potential benefits it has to offer its users have allowed it to gather a great deal of popularity in little time.

Its decentralized nature allows it to be a cheaper medium of transactions as there is no central authority. Also, a cap of 21 million to its maximum supply allows Bitcoin to be used as an inflation hedge.

Trading of this cryptocurrency has become fairly easy over the last few years with a number of exchanges allowing bitcoin holders to trade it. The availability of trading platforms and software, such as the Bitcoin System, has made the process of trading much more convenient for traders.

These platforms use AI technology to generate powerful algorithms and in then, trading signals. You don't even need to be an active trader to earn profits with these platforms as they do almost everything on your behalf.

Perhaps another force behind Bitcoin's popularity is its characteristic of being so-called "trustless". This means that there is no need for a higher authority to control the decisions made in regards to this cryptocurrency as it was all written in the code by its mysterious creator, Satoshi Nakamoto.

The code is sacrosanct and there have only been minor changes to it since it was invented and, that too, was also with the consensus of the Bitcoin community. In short, the code governs everything and there is no need to put your trust in an authoritative party as is the case with fiat currencies