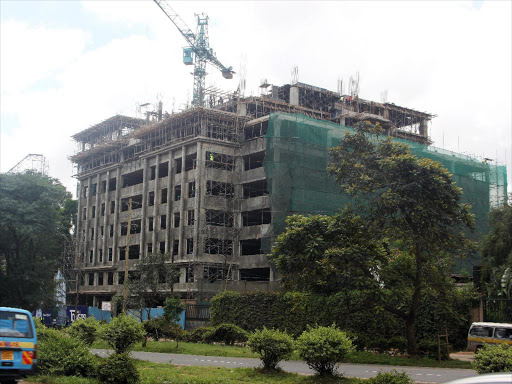 LUCRATIVE: An office block under construction in Westlands, Nairobi. The area has high returns on real estate investments.

Real estate investors are resorting to discounts to stir up property uptake and keep afloat amid rising concerns that supply could be outweighing demand.

Listed mortgage firm, HF Group which posted its first ever full year loss of Sh598 million in 2018 down from a net profit of Sh126 million in 2017 is running a   campaign offering 100 per cent financing and reduced prices by up to 30 per cent.

Standard Chartered Bank Kenya has announced a new mortgage offer that guarantees customers 2.5 per cent fixed margin rate throughout its life circle. This means, the mortgage will be issued at an effective rate of 11.5 per cent with no legal and valuation fee.

A spot check by the Star in Nairobi saw empty residential houses in Lavington, empty serviced apartments along General Mathenge Road in Westlands and empty rental spaces in malls along Thika Superhighway.

He told the Star that the building attracted only one new customer last year, despite a 20 per cent discount offer.

"I was among the first occupants of this building, having paid Sh10 million. The price was slashed last year to Sh8 million but only one person bought a unit. I bought too early, prices likely to drop further,’’ Waweru said.

His sentiments are supported by Q4 Hass Property Index that shows apartment prices dropped by 3.2 per cent year on year. They have however grown by 2.7 per cent since 2007.

According to the Kenya Bankers Association House Price Index (KBA-HPI), the pattern mirrors the price evolution experienced in 2017 with indications that the slow pace of price growth experienced in the past quarters will prevail.

"On the supply side, the market appears to be tilting towards few additional units coming into the market due to constrained access to credit by developers. Limited credit is a binding constraint on the demand side,’’ KBA report said.

Malls are also not fully occupied due to slow demand for space. Juja City Mall along Thika Superhighway, a 10-acre facility built at Sh1.7 billion is almost half empty despite opening in November 2015.

The same scenario is witnessed at Kenyatta University’s Unicity Mall and Ananas Mall in Thika town.

According to CBK, the sector contributed Sh6 billion to Sh18 billion increase in nonperforming loans in February, 12.8 per cent year on year gross bad debt compared to 12 per cent in December 2018.

Ruth Okal, an asset manager at Fahari I-REIT said the sector is witnessing a downfall with landlords willing to bargain with customers.

“Yes we experienced a downfall in one property. Landlords are always left with the choice of letting a tenant vacate and have empty or keep them for six months at one year for free,” Okal said.