this year if not checked an estimated Sh473 billion meant for development will not be efficiently used.

•From the survey titled Macro-Fiscal analytic snapshot Kenya only Sh70 in every Sh100 that has been earmarked for development is utilized by the  National government.

•In the BPS, the government will increase development spending to Sh1.15 trillion in three years as the new administration seeks to sink more money into infrastructure, energy and ICT. 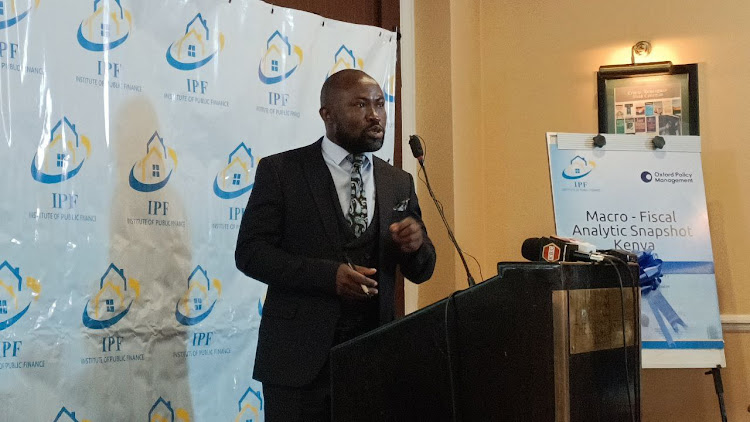 Kenya's development budget at the national and county levels is not fully utilised in any financial year, a new report shows.

The Institute of Public Finance study established that  only Sh70 in every Sh100 earmarked for development is utilised at the national level.

The report titled Macro-Fiscal analytic snapshot Kenya notes that this is however higher than the counties where only 56 percent of development funds are utilised.

"If you combine both for the national and County governments, this therefore means that at we have over 70 percent of the budget is not utilised for its intended purpose," said Senior research lead at Institute of Public Finance (IPF) John Nyangi.

This means that in the current budget cycle ii is likely that an estimated Sh473 billion meant for development will go unused.

This coming at a time when the Kenya Kwanza administration last week unveiled its first Budget Policy Statement setting out its priority programs, policies and reforms.

In the BPS, the government will increase development spending to Sh1.15 trillion in three years as the new administration seeks to sink more money into infrastructure, energy and ICT.

The budget plan shows that the outlay will increase from Sh596.6 billion in the current financial year to Sh1.15 trillion in the next three years.

In the projections, energy, infrastructure and information communication and technology (ICT) will take the largest share of the allocations at Sh276.7 billion in the current fiscal year expected to rise to Sh324.4 billion in 2025.

However,  in the next budget cycle the county governments are set to receive a nominal increase of 1.4per cent in the FY23/24.

He said long-lasting peace in DRC will promote the region's economic prosperity.
News
5 days ago

The region is projected to record the highest growth this year beside the other regions.
Business
6 days ago

Inflation to drop below 7.5% by end of March - CBK

Kenya breached its target range in June last year
Business
6 days ago
Post a comment
WATCH: The latest videos from the Star
by JACKTONE LAWI
Kenya
23 January 2023 - 15:00
Read The E-Paper