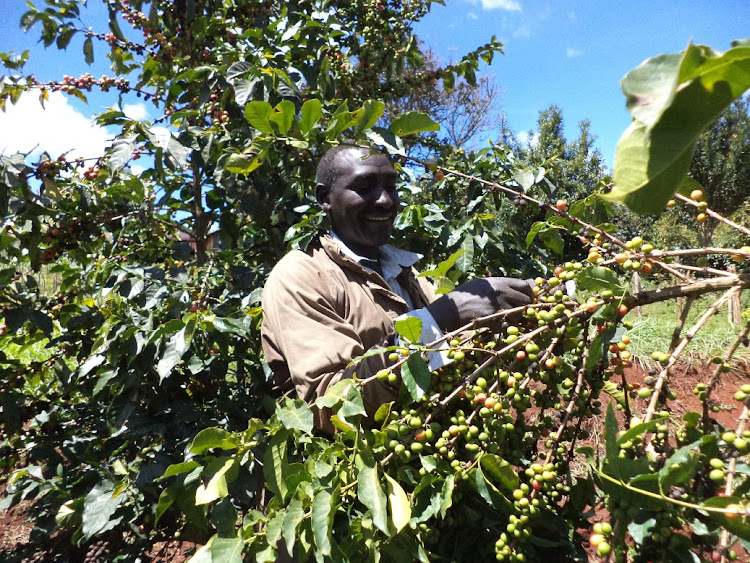 David Macharia tends to his coffee bushes at his farm in Nyeri
Image: EUTYCAS MUCHIRI

The Union was formed in 2017 to enable members to synergize their efforts when addressing common challenges as well as enable them to seize opportunities in the production, processing, and marketing of coffee among other areas of common interest.

The coffee sub-sector implementation standing committee, tasked with reviving the ailing sector, had been domiciled at the Office of the President during the previous administration.

Addressing the media after a consultative meeting with the Cooperatives and Micro, Small and Medium Enterprises Cabinet Secretary Simon Chelugui, NACCU and KPCU leadership welcomed the move.

The deputy president has been championing the rights of smallholder farmers and believes that farmers can double their earnings if cartels in the coffee and tea sub-sectors are weeded out.

According to him, middlemen are paying farmers less than Sh100 per kg of Cherry compared to an average of close to Sh120 which the same coffee fetched at the local auction.

"This is a reap off. The sector needs to be streamlined to ensure farmers earn their rightful share,'' Gachagua said.

The union said it was fully behind the implementation committee led by Joseph Kieyah and supports the execution of all the eight pillars of the task force reforms report that has been gathering dust for a year now.

"The implementation of the findings is long overdue while the small-scale coffee producers continued to suffer".

The lobby now wants Gachagua to deal with the pricing issue as a matter of priority, accusing Nairobi Coffee Exchange (NCE) of justifying an artificial pricing mechanism at the Nairobi auction that has seen coffee prices drop by half.

According to the lobby, the reforms must address the following question: How will the small-holder coffee farmer maximally benefit from his coffee, and how can the coffee value chain be made more efficient and affordable for the smallholder farmers?

“That was a good move by the President as some of these changes require political goodwill and the DP is one person who has a serious political connection,” NACCU chairman Francis Ngone said.

The lobby also wants more representation of smallholder coffee farmers in the national dialogue, dismissing talks of coffee reforms being a political trap for DP as a diversionary narrative by coffee cartels.

"We remind Capital Markets Authority to look into the representation of farmers at the board of Nairobi Coffee Exchange as per the Attorney General's advisory on  September 20, 2021,'' the union said.

Coffee is one of the most important cash crops in Kenya with a total production of about 50,000 tons annually making it the 25th largest exporter of Arabica coffee in the world.

Kenya earned $213 million from coffee export in the period January to November 2021, with the value surpassing the entire 2020 earnings which stood at 196 million dollars according to the Kenya National Bureau of Statistics (KNBS) export data.

This was a relief to the 78- year old coffee union, which had been placed under receivership since 2009 after failing to honor a financial obligation amounting to over Sh700 million, owed to the lender, lawyers, and coffee farmers.

He challenged the directors to work with the government to streamline the sector.
News
3 weeks ago

Your days are over, Gachagua tells KTDA cartels

Says this happens while other crops like maize are exempted from taxes
News
1 month ago
Post a comment
WATCH: The latest videos from the Star
by VICTOR AMADALA Business Writer
Kenya
17 January 2023 - 18:00
Read The E-Paper