In the leading retail chains a crate of eggs is retailing for between Sh495 and Sh642.

•For a smaller crate of 15 eggs, one has to part with Sh321 while the cost of an egg at small retail shops was ranging between Sh15-20.

•Early last year the prices of eggs had dropped to Sh260 per crate after imports from Uganda flooded the market prompting government to impose a levy on imports. 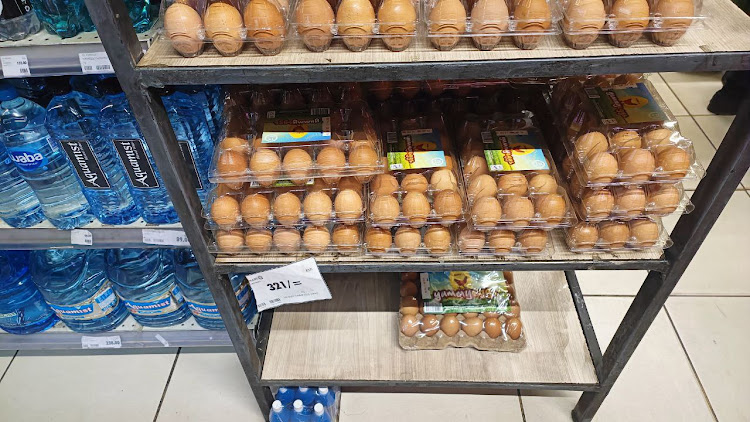 The cost of eggs has almost doubled to an average of Sh642 per tray in January from Sh360 in May last year as households continue to grapple with the rising cost of living.

A spot check across the shops in residential estates shows that on average a crate retails for between Sh430 and Sh450 for a crate carrying 30 eggs.

In the leading retail chains, however, the figure rose to between Sh495 and Sh642.

Naivas is selling at between Sh495 and Sh499 per crate while Quickmart was selling at Sh642 as of Wednesday morning.

Humphrey Mbugua, a poultry specialist and veterinary attributes the rise in cost to the slow production of eggs that has arisen due to a rise in the cost of feeds.

A rapid surge in the cost of chicken feeds is forcing poultry farmers to scale down their stock resulting in an increase in egg prices driven by scarcity.

“Feeds account for about 70 per cent of the costs associated with eggs production, the cost of feeds increased and some farmers had to resort to cheaper feeds that have reduced production spiking the cost,” said Dr. Mbugua in a phone interview.

He says that in areas such as Kakamega, the cost per crate has risen to about Sh500 while some parts of Kiambu which are among the leading areas in the production of Eggs are getting the product at Sh390.

With the reduced production, most shops and supermarkets are suffering from a low supply of eggs which has seen the price of the commodity spike by about 30 per cent in just six months.

Kenya Poultry Farmers Association chairperson Wairimu Kariuki told The Star that chicken feeds have increased in some instances by up to Sh500.

She points out that the rise in costs of products such as maize which are used in the production value chain of chicken feeds has had a ripple effect on the general prices.

“One of the farmers who used to supply me with eggs has quit because it has become expensive to manage,” said Wairimu.

For a smaller crate of 15 eggs, one has to part with Sh321 while the cost of an egg at small retail shops was ranging between Sh15-20.

According to Kiambu Farmers Cooperative Society coordinator Zachary Munyambu, most poultry farmers sold all their chickens or reduced their stock in the past few months due to the high cost of running the business.

The change in feed prices translated to a 31 per cent spike in six months.

“The main consumer is at the stage of growers whereby you need to buy a 70kg bag of the growers’ mash to feed 1,000 chicken at a cost of Sh3400 for 3 months, after this the eggs you sell are not bringing back the money you use so for some farmers it is better to slaughter and sell,” he said.

Early last year the prices of eggs had dropped to Sh260 per crate after imports from Uganda flooded the Kenyan market prompting the government to impose a levy on egg imports.

Ugandan traders dealing in poultry and poultry products were forced to pay Ksh70 per tray to secure entry of their eggs into Kenya.

However, there is hope for the local poultry farmers after the government through a gazette notice directed at the importation of maize and rice part of which will address the shortage of feeds

"Cabinet Secretary for the National Treasury and Economic Planning directs that 900,000 metric tonnes of white maize grain and 600,000 metric tonnes of milled rice may be imported into the country duty-free from the 1st February 2023 to the 6th August 2023," reads a gazette notice by  National Treasury and Economic Planning Cabinet Secretary Njuguna Ndung'u.

According to the UN's Food and Agriculture Organization's 2019 statistics, Kenya has an estimated 43.8 million chickens, contributing 5.1 per cent of the total livestock value added.

Chicken was the most ordered delicacy in Kenya in 2022

Officials say farmers face a difficult time because they are paying VAT on feeds and equipment.
News
2 months ago