Vivo Energy, Total and Rubis continued to be top dealers.

•Sales during the period hit 5.2 million tonnes, attributed to the robust recovery of the economy in 2021. 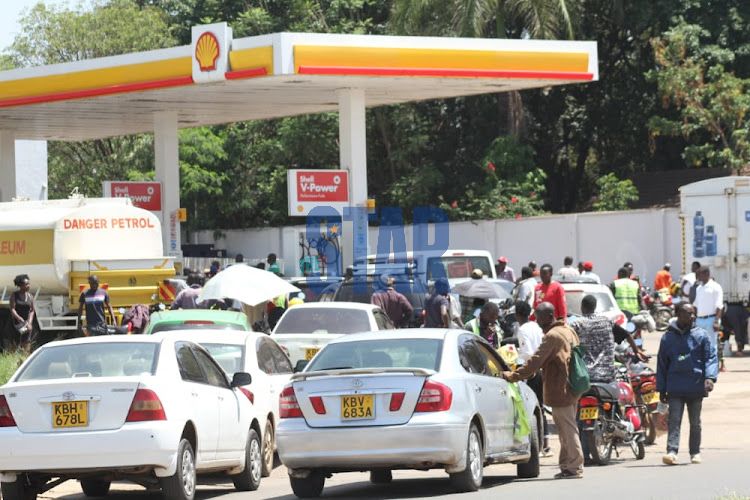 Motorists queue to get fuel at Shell petrol station a long Kisumu-Kakamega road on April 4, 2022. This was during the fuel shortage in Kenya/
Image: FILE

Domestic sales of petroleum products increased by 11 per cent in the financial year 2021/2022, latest energy sector data shows, as a rebound on economic activities fuel up demand.

The total domestic demand for imported refined products through the Open Tender System increased by 4.55 per cent per cent to 5.7 million cubic metres, The Energy and Petroleum Statistics report for the financial year ended June 30, 2022 indicates.

This was partly attributed to a 30.2 per cent increase in the demand for jet fuel as a result of the opening up of the economy and resumption of air travel across the world,” the report by the Energy and Petroleum Regulatory Authority (EPRA) states.

Sales during the period hit 5.2 million tonnes, attributed to the robust recovery of the economy in 2021.

There were 111 registered OMCs and approximately 4,373 retail stations in Kenya as at June 2022.

During the period under review, all economic sectors, except tourism, registered a rise in net domestic sales of petroleum products, EPRA notes, as the economy picked from the slow down witnessed at the height of the Covid-19 pandemic.

Vivo Energy, Total and Rubis continued to dominate the market with 23.8 per cent, 17.3 per cent and 10 per cent market share, respectively.

Diesel, mainly used in the transport and agriculture activities remains the most consumed petroleum product with 2.7 million cubic metres sold during the year, followed by super petrol with an estimated consumption of 2.2 million cubic meters.

The agriculture sector was the biggest consumer of products during the year followed by retail pump outlets and road transport, air transport , power generation, industrial and commercial sectors and uptake by government.

Meanwhile, demand for Liquefied Petroleum Gas (LPG) has maintained an upward trend with consumption hitting 373,865 metric tonnes in 2021, a 13.9 per cent increase from the 320,909 metric tonnes recorded in 2020.

The total number of Bulk LPG storage facilities increased to 120 with a combined storage capacity of approximately 34,000 metric tonnes.

This is a significant increase from the eight facilities that were operational in 2012.

The facilities are distributed across 25 counties, which is a reflection of efforts made to improve LPG access to consumers.

Prices dropped by a shilling in the latest review.
Business
2 months ago

The high cost of living has seen users cut on consumption.
Business
3 months ago
Post a comment
WATCH: The latest videos from the Star
by MARTIN MWITA Business Writer
Kenya
10 January 2023 - 11:30
Read The E-Paper