•The charm offensive is seen to focus on President William Ruto’s pledges.

•CS Kuria who has held meetings with both government officials and private sector players has been keen on agriculture, health, education and energy among other areas. 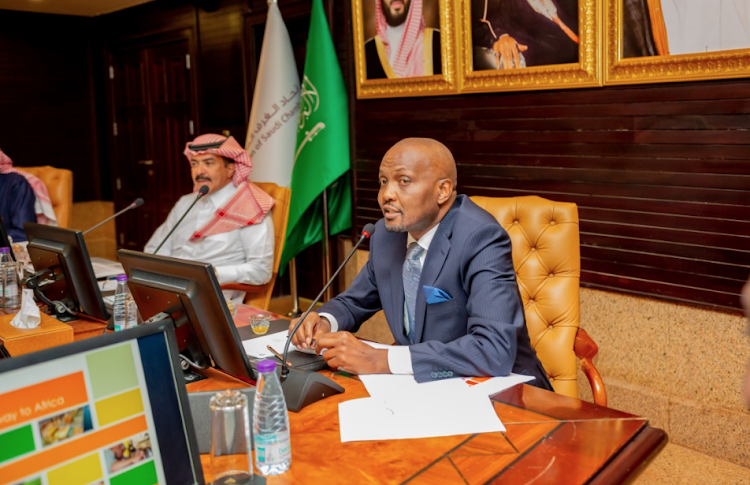 Investments, Trade and Industry CS Moses Kuria during a meeting with the Federation of Saudi Chambers of Commerce & Industry/TWITTER

Kenya is keen to unlock more trade and investments with the Middle East, as CS Moses Kuria holds about 30 meetings in two countries in the last two weeks.

After leaving the US-Africa Leaders Summit in mid December, Investments, Trade and Industry CS Moses Kuria has been a busy man shuttling between Saudi Arabia and the UAE.

The charm offensive is seen to focus on President William Ruto’s pledges mainly on agriculture where the Kenya Kwanza government is keen to invest at least Sh250 billion in five years, effective this year, to boost Agriculture and food security.

Kuria who has held meetings with both government officials and private sector players has been keen on investment opportunities in agriculture, health, education and energy.

Other areas include transport and logistics, trade, real estate (with a focus on affordable housing), telecommunication and digital economy with a keen eye on Small and Medium Enterprises (SMEs).

In his series of meetings, CS Kuria has established partnerships to invest in tech startups and improving logistics and travel in Kenya.

He also held talks with a number of ministers among them UAE Minister of State for Industry and Advanced Technology Omar Al Suweidi.

We agreed to work together to foster industrial and technological linkages between Kenyan and UAE manufacturers culminating in the Joint preparations for the Kenya International Investment Conference (KIICO) in the first quarter of 2023,”Kuria notes.

During talks with the UAE Minister of State for Foreign Affairs in charge of Africa, Sheikh Shakhboot Al Nahyan, the two reviewed ongoing trade and investment initiatives including the Comprehensive Economic Partnership Agreement (CEPA).

Meanwhile, Saudi Arabia has expressed the desire to locate its African export operations in Kenya, while partnering with Kenya to set up the Kenya International Agency Office in Riyadh and export warehouses for Kenyan products in Riyadh, Jeddah and Dammam.

Kuria also held talks with Sheikh Yasser Al Rhomaizan, the governor of the Saudi Public Investment Fund which has assets under management of $650 billion (Sh80 trillion).

We agreed to initiate a framework of partnership between PIF and the Kenya Development Corporation (KDC) for co-investments in renewable energy, special economic zones, digital economy, water, financial services, infrastructure, logistics and other sectors,” the CS said.

If the meetings yield fruits, it could help change the trade patterns which are currently in favour of the two countries.

Kenya’s imports from the UAE were valued at Sh178.5 billion in 2021, up from Sh92.2 billion the previous year, the Kenya Economic Survey 2022, by the Kenyan National Bureau of Statistics, indicates.

Expenditure on imported motor spirit premium, gas oil and other refined petroleum products from the UAE rose from Sh59.5 billion in 2020 to Sh141.1 billion in 2020, resulting to a 93.5 per cent increase in total import expenditure from this source,” KNBS says in its annual report.

Similarly, increased imports of refined petroleum products, specifically automotive gas oil and jet fuel, from Saudi Arabia drove the increase in imports from Sh69.0 billion in 2020, to Sh114.7 billion in 2021.

The value of Kenya’s exports to Saudi Arabia dropped to Sh7.7 billion from Sh8.2 billion in 2020.

This is part of digital transformation and utilisation of digital talent for mutual benefit.
InPictures
1 month ago

Currently, only Morocco has a pact in place.
Business
1 month ago
Post a comment
WATCH: The latest videos from the Star
by MARTIN MWITA Business Writer
Kenya
04 January 2023 - 04:00
Read The E-Paper