•Mahathi Infra Uganda Limited has finally put to use its offloading facility, storage tanks, and a barge.

•Kisumu Oil Jetty has been idle since 2018 for lack of a corresponding facility in Uganda. 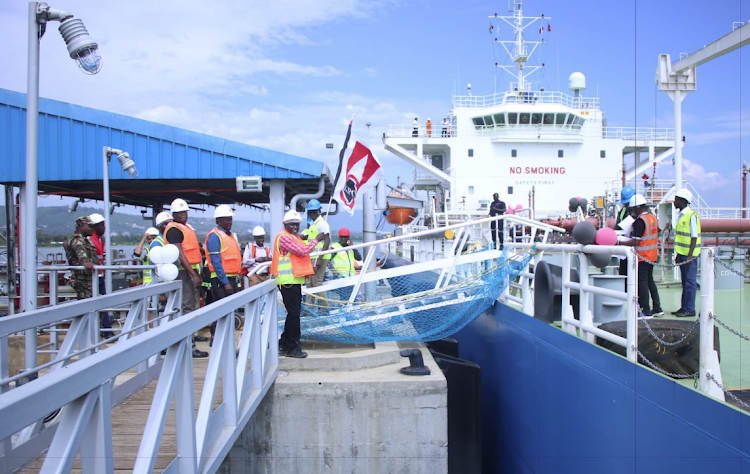 Kenya’s quest to increase its petroleum products export has received a major boost with the coming into operation of the Sh1.7 billion Kisumu Oil Jetty (KOJ).

The first consignment of 4.5 million litres of fuel products has already landed at Entebbe Uganda, ending about five years of waiting since the Kenya Pipeline Company (KPC) owned facility was completed, in 2018.

The delays had been caused by lack of a corresponding facility in Uganda.

Mahathi Infra Uganda Limited has finally put to use its offloading facility, storage tanks and a barge that will be used to move fuel between Kenya and Uganda, through Lake Victoria.

The first vessel, MV Kabaka Mutebi II which was used in a technical trial last week, will move products in the initial stages as Mahathi continues with the construction of three more vessels.

According to the company, delays in completing the project, which affected the Kenyan facility, had been caused by a lack of road infrastructure from Bukasa Inland Port and the recent rising of Lake Victoria waters, which led to the closure of the construction site.

Road construction was mainly affected by delays in the compensation process, the contractor said.

At the height of the Covid-19 pandemic, at least 164 of the contractor’s 300 experts on-site also contracted the virus, stalling the project’s construction.

The latest development however now creates a complete marine fuel transportation system between Kenya and Uganda, with supplies targeted for the neighbouring country and beyond.

The jetty by Mahathi Infra Uganda Limited runs about 270 metres into the lake.

It has put in place storage tanks with a capacity of 70 million litres.

Mahathi Infra (Uganda) Limited chairman George Mukula yesterday said the second barge will be ready by March this year, after which the entire project will be officially commissioned by Presidents from the region, led by Kenya and Uganda.

“We are building four (barges) in total as we expand our capacity and enhance lake transport logistics linking the entire East Africa Community region,” Mukula told the Star on the telephone.

According to Mukula, the fuel products business along Lake Victoria will be one of the largest bilateral trade engagements between Kenya and the region.

Kenya will be targeting Uganda, Rwanda, Burundi, Eastern DRC and parts of Tanzania.

One barge is the equivalent of 60 oil tankers moving fuel by road.

“We expect the use of the lake facilities and water transport will reduce the cost of transporting fuel by about 50 per cent,” Mukula said.

It takes about 14 hours to move products from Kisumu to Uganda, doing away with frequent border delays faced by road oil tankers.

The company has struck a deal with Total while talks are on with 19 other Oil Marketing Companies for the use of the Kisumu facility and its facility in Uganda.

The project was partly funded by Equity Bank.

Uganda is also expected to put up another facility in Jinja by the Uganda National Oil Company (UNOC) and One Petroleum.

The coming into operation of the KOJ is expected to help Kenya recapture the petroleum export market lost to Tanzania in recent times.

While it has been serving the Ugandan market through the Kisumu and Eldoret depots, Kenya Pipeline has lost about 20 per cent of its export business in the last four years, with competition remaining high on the Central Corridor connecting landlocked countries to the Port of Dar es Salaam (Tanzania).

Kenya serves the region through the Northen Corridor that connects the Port of Mombasa to the hinterland.

The Kisumu Oil Jetty had been idle since the contactor, Southern Engineering Company (SECO), handed over the facility to Kenya Pipeline Company.

With the two facilities in Uganda and Kenya operational, it creates a stable and sustainable fuel supply system, according to experts.

KPC managing director Macharia Irungu further notes Kenya has the opportunity to bolster regional business and strengthen her ties with the neighbouring countries.

“The project has the potential to turn Kisumu into a focal point of oil and gas commerce in the region making it one of the busiest inland ports in Africa,” Irungu notes.

To ensure the new jetty is adequately supplied and can sustain the export market, KPC already constructed a 122km Sinendet-Kisumu pipeline which is commonly referred to as Line 6.

The completion of this pipeline from Sinendet in Nakuru county to Kisumu in 2016 has boosted petroleum product availability in western Kenya, which used to experience frequent fuel outages.

This is enough to pay annual interest on the SGR loan.
Business
1 year ago
Post a comment
WATCH: The latest videos from the Star
by MARTIN MWITA Business Writer
Kenya
03 January 2023 - 04:00
Read The E-Paper