Students in national and extra-county schools will pay Sh53,554, up from the present Sh45,000.

•The ministry of education has maintained that the Government Capitation to schools to actualize Free Day Secondary Education will be Sh22,244 annually per learner. 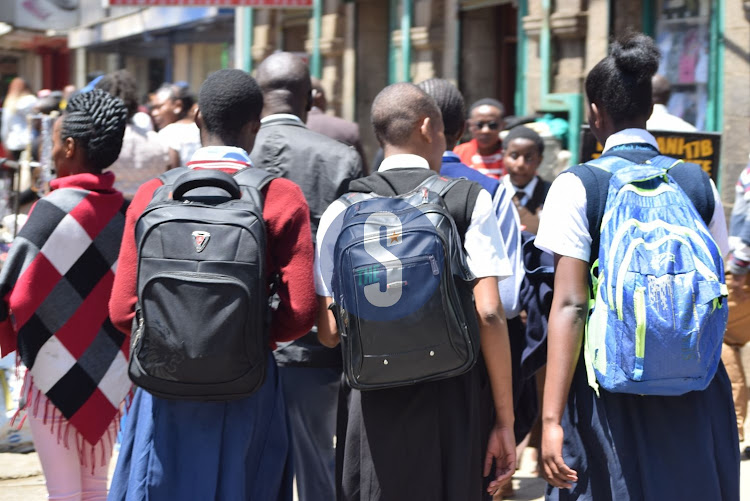 Students seen within Nairobi CBD resume school from midterm break which was occasioned by elections. The school going children are set to complete the second bit of the term in September. August 18, 2022
Image: CHARLENE MALWA

Former President Uhuru Kenyatta’s regime had subsidised the fees as a cautionary measure for parents from the impacts of Covid which had led to reduced incomes for many families.

However, President William Ruto’s administration has opted to do away with most subsidy programmes.

In the 2021/2022 school calendar, parents had to contend with paying fees for four terms as the country raced to catch up with the curriculum.

The expiry of the programme means that Students in national and extra-county schools will pay Sh53,554, up from the present Sh45,000.

Expiry of the programme and increased inflation that has taken a toll on the cost of food is expected to be passed on to the parents as evidenced by seculars by school heads.

The ministry of education has maintained that the Government subsidy (Capitation) to schools to actualize Free Day Secondary Education (FDSE) will be Sh22,244.00 annually per learner.

“Schools classified as Special needs received enhanced capitation to Sh53,807 distributed in the fees structure,” MoE said in a communication.

The structure includes a Government subsidy of Sh19,053.00 per learner for Boarding Equipment and stores and a top-up grant of 12,510.00 per learner to cater for assistive devices and any additional personnel needed.

The government has announced plans to abolish boarding primary schools.
Counties
3 weeks ago

MURABULA: Why ranking of students and schools in exams is beneficial

Competition is an inevitable fact in all spheres of life.
Opinion
3 weeks ago

Cut down on January spending, it'll be bumpy ahead

The country’s economic doesn't look very promising, if the report by KNBS is anything to go by.
Opinion
3 weeks ago

This follows concerns that the younger generation is getting lost in modernism, abandoning what they consider less interesting and boring culture
Counties
3 weeks ago

Parents will have to pay full school fees after the government removed the education subsidy.
News
3 weeks ago
Post a comment
WATCH: The latest videos from the Star
by JACKTONE LAWI
Kenya
03 January 2023 - 14:12
Read The E-Paper