•The slow penetration among the general public has however been due to the high costs of such devices. 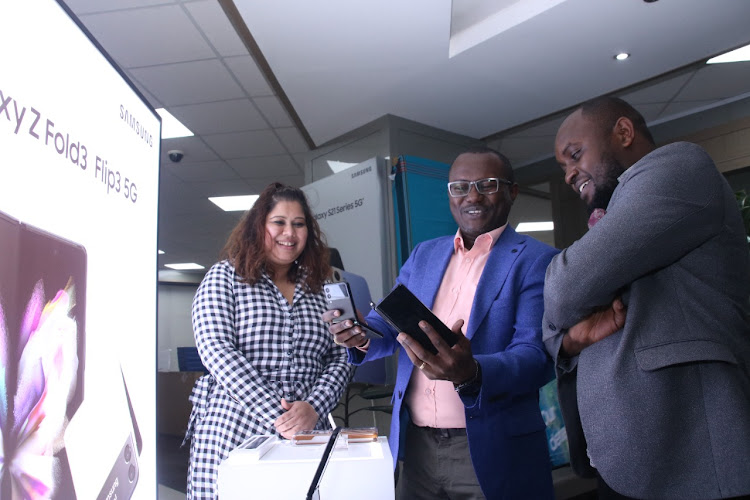 A growing middle class in the country is driving up the uptake of premium high end smartphones.

The demand is high with some of the popular brands like Samsung Z flip 4 retailing for (Sh143,000), and Samsung Galaxy Z Fold 4 which goes for Sh257,000, Apple, realme GT Master and Oppo flagships such as Find X5 (Sh 90,000) and the Reno 8 recording increased sales and enquiries.

Social media influence has also played a role as younger wealthy Kenyans desire what is new in the global market.

This even as Kenya continues to record higher mobile penetration than the global average.

“The two smartphones ran out within a month and we are planning to ship in realme 10 5G this January,” said Aliviza.

Despite the increased demand for premium 5G smartphones, Safaricom says out of nearly 27 million smartphones in use in Kenya, only about 200,000 were 5G-compatible as at last day of November.

The slow penetration among the general public has however been due to the high costs of such devices.

OPPO product Manager Earnest Eigut says the high and midrange smartphones with 5G are garnering traction with eight out of ten smartphones buyers opting for the same.

“Consumerism manner in Kenya is higher than other African countries. A lot of clients now are deviating towards internet calls, online gaming, video streaming. The flagship Find X05 phone performed well in the local market as all units set for the Kenyan market were all sold out,” said Earnest.

Samsung says that the number of Galaxy Z Fold and Galaxy Z Flip smartphones sold for enterprise use has more than doubled year on year.

From January to October 2022, the number of foldable smartphones Samsung contracted to enterprise customers increased by 105 percent compared to the same period in 2021.

The Head of Mobile Division, Charles Kimari points out that as companies shift towards work-from-anywhere policies, they are looking to technology for new ways to maximize productivity.

“Foldables have particularly attracted the financial services industry, where 74 percent of a sample group of financial advisors say staying connected via mobile apps is important or critical,” said Kimari.

The phone manufacturer is projecting that the foldable smartphone shipments will reach 16 million units worldwide, an increase of 73 percent year on year, the form factor is rapidly becoming mainstream, and shipments are expected to grow to 26 million units in 2023.

The ease of multitasking on a large screen, and the powerful app optimizations for foldable devices, are helping drive adoption among enterprise users.

Tecno has also introduced introduce its foldable smartphones Tecno Phantom V fold which is estimated that will retail for between Sh90,000 and Sh100,000 once it hits the Kenyan Market this year.

Generally, Africans have begun moving at a much faster rate in upgrading their smartphones to high performance 5G devices compared to the rate at which their home countries are developing and rolling out network infrastructure to support high-speed internet.

The number of 5G devices shipped to the continent rose significantly in the second quarter of 2022 as vendors intensified their battle to grow market share.

Shipments of 5G devices increased 26.9 Per cent in Q2 2022 and their share of the overall market is growing as major brands launch more flagship 5G devices into the market.

IDC senior research analyst, George Mbuthia says The demand for 5G over the period significantly outpaced the overall growth of smartphone shipments into Africa – which fell 7.9 Per cent quarter-on-quarter due to gloomy economic prospects, rising inflation and component shortages.

According to IDC, 4G devices make up 73.9 Per cent  of all smartphone shipments to Africa followed by 3G (18.5 Per cent ) and 5G (7.6 Per cent ) with the latter projected to gain a significant market share as more countries begin to rollout network infrastructure to support this technology.

South Africa (16.6 Per cent), Nigeria (13.8 Per cent), and Kenya (7.7 Per cent) currently hold Africa’s top three smartphone market slots by unit share, according to the IDC.

However, the tough economic environment and global inflation is threatening to wipe the gains made in the sector.

Africa's smartphone markets experienced a 19.9 percent Year on Year decline in phone shipments in the third quarter of 2022, to post total 42.2 million units

IDCs Q3 says the declines seen across the continent were caused by an overall slow economy, high inflation rates, higher dollar exchange rates, and the increasing cost of living.

The intense competition has seen phone makers now eyeing partnerships as the cutting edge to out-do their competitors in 2023.

“In previous years the Fold has always been the driver for the Foldable smartphone category but this year we have seen a shift in purchase trends and we can attribute this to the acquisition steps we have taken like partnerships," Kimari told the Star.

The electronics firm partnered with Badili Africa who offer trade in service and Aspira Kenya who allow our customers to acquire the devices and pay within 6 months attracting 0% interest.

He says customer experiences have been popular across many sectors of businesses and industries.

“In the current market, competition is fierce, especially in the financial services sector. Professionals need the best tools to help them maintain consistency and routine, even while working remotely,”

He adds that modern devices must support complex workflows, including alerts, research, charts and portfolios, and give customers the power and productivity advantage they need to stay competitive.

Looking ahead, IDC expects the African smartphone market to grow 8.8 percent YoY in unit terms in 2023.

Badili Africa, a company that allows customers to trade in their old phones for new ones at friendly prices has raised $2.1 million (Sh259 million) ...
Business
2 months ago

They are capitalising on increased phone, Internet and VPN access
News
2 months ago

CEO David Omwoyo says trained, accredited journalists can use the gadgets at events.
News
2 months ago
Post a comment
WATCH: The latest videos from the Star
by JACKTONE LAWI
Kenya
03 January 2023 - 09:00
Read The E-Paper