This was fuelled by higher petroleum and fertiliser imports.

•The widening deficit came despite exports increasing by 29.7 per cent to Sh227.8 billion.

•Total exports earnings from Africa registered the highest increase from Sh74.1 billion in third quarter of 2021 to Sh97.6 billion in 2022 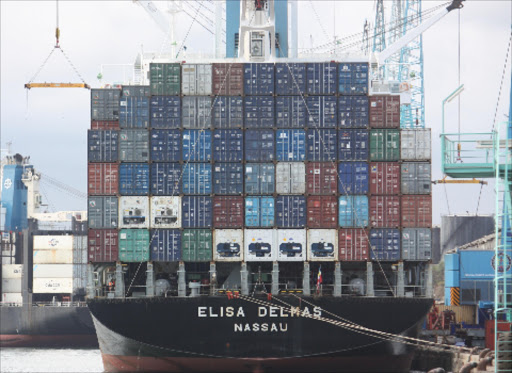 BUSY: Containers being offloaded from a ship at the Port of Mombasa.

Kenya's trade deficit widened by 15.8 per cent in the third quarter of 2022, pushed by an increase in the importation of petroleum products and fertiliser.

Importation of the two commodities more than doubled during the period under review, Kenya National Bureau of Statics (KNBS) data shows.

The country’s Quarterly Balance of Payments statistics show that in the third quarter of 2022, trade deficit was at Sh434.0 billion compared to the Sh366.1 billion deficit recorded in a similar period last year.

This was despite exports increasing by 29.7 per cent to Sh227.8 billion.

An increase in domestic exports of tea, which rose by 45.5 per cent was among the top drivers of local exports.

The increase in import expenditure on the other hand was largely due to growth in imports of petroleum products, despite the sustained reduction in the price of crude oil in the global market in the preceding months.

Efforts by Kenya and eight other countries to commence trading under the new trading bloc’s framework, Africa Continental Free Trade Area (AfCFTA) have begun bearing fruits as exports to the continent grew by 31.7 per cent.

“Total exports earnings from Africa registered the highest increase from Sh74.1 billion in third quarter of 2021 to Sh97.6 billion in 2022,” reads the report.

Domestic exports of palm oil to Uganda, tea to Egypt and palm oil, chemical fertilizers and stoves to Rwanda, partly contributed to the increase in export earnings from the region.

This was largely boosted by an increase in domestic exports of coffee to Germany and re-exports of kerosene type jet fuel to the Netherlands.

Export earnings from Asia increased by 41.8 per cent to Sh54.0 billion in the third quarter of 2022 compared to the corresponding quarter of 2021.

This was majorly driven by an increase in domestic exports of tea to Pakistan and the United Arab Emirates.

Similarly, growth in domestic exports of coffee and articles of apparel and clothing accessories resulted to a 39.4 per cent increase in export earnings from the US.

Receipts from international trade in services went up by 66.0 per cent while services payments increased by 46.0 per cent.

Currently, only Morocco has a pact in place.
Business
1 month ago

Ruto said that the relationship between Kenya and China has provided access to Chinese market.
News
1 month ago

Why developing countries support WTO case against the US

Kenya's market share in coffee production accounts for between 500,000 and one million bags.
News
1 month ago

The most beautiful fruit is the dragon fruit, said to have been spat out by the dragon.
News
1 month ago

SGR gears up for increased passenger numbers during Christmas

It is also looking at high cargo volumes over the festive period.
Business
1 month ago
Post a comment
WATCH: The latest videos from the Star
by JACKTONE LAWI
Kenya
02 January 2023 - 04:00
Read The E-Paper