SGR gears up for increased passenger numbers during Christmas

•Madaraka Express Freight Service is also keen on supplying adequate wagons for both container and conventional cargo evacuations for imports and return exports.

•Daily supply of above 500 wagons is currently being maintained with all mainline locomotives being deployed to cater for cargo haulage needs. 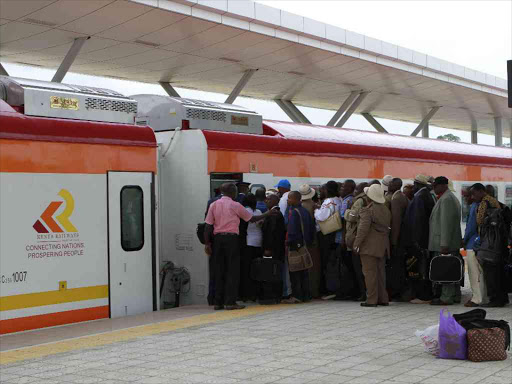 Kenya Railways Corporation (KRC) has put in place adequate measures to ensure vibrant and seamless operations on both cargo and passenger trains’ movement over the festive season, management has said.

The three sets of Madaraka Express passenger trains will be fully operational between the capital-Nairobi and Mombasa throughout the festive season.

Additional coaches are being added to cope with the increased booking demands currently being experienced.

Similarly, the Madaraka Express Freight Service is also keen on supplying adequate wagons for both container and conventional cargo evacuations for imports and return exports.

Daily supply of above 500 wagons is currently being maintained with all mainline locomotives being deployed to cater for cargo haulage needs.

In a statement yesterday, management said KRC is working closely with other key government agencies that include Kenya Ports Authority (KPA), Kenya Revenue Authority (KRA), and other multi-agencies to facilitate cargo movements and clearance.

This is especially on current imports targeting the festive season.

"The corporation will be on standby with additional coaches and wagons but advises passengers to book early to avoid disappointment," the corporation said in a statement yesterday.

Between January and November 2022, Afristar, the SGR operator, deployed 2,695 trains that ferried 4.9 million tonnes of cargo from the Port of Mombasa to the hinterland(up direction).

About 631,878 tonnes of cargo was hauled from the hinterland to the port (down direction).

This is an increase compared to 2,417 trains that ferried 4.3 million tonnes up direction, and 579,959 tons of cargo down direction over a similar period last year.

The SGR  remains a  key part of the country's transportation and storage sector which has significantly improved this year, building on a strong performance recorded last year after the easing of travel restrictions.

The total value of output from the sector rose by 16.7 per cent to Sh Sh2.2 trillion, the Economic Survey 2022 indicates.

Earnings from the Madaraka Express more than doubled to Sh2.2 billion in 2021.

Revenue from cargo transported on the MGR rose marginally to Sh1.1 billion.

State to increase trains to Kisumu

The move aims at reducing congestion on the roads.
News
1 month ago

Most mainstream hotels recorded over 80 per cent of bookings in first week of December.
Counties
1 month ago
Post a comment
WATCH: The latest videos from the Star
by MARTIN MWITA Business Writer
Kenya
19 December 2022 - 04:00
Read The E-Paper