•Acquisition of TMB has seen KCB increase its presence in six countries including a representative office in Ethiopia. 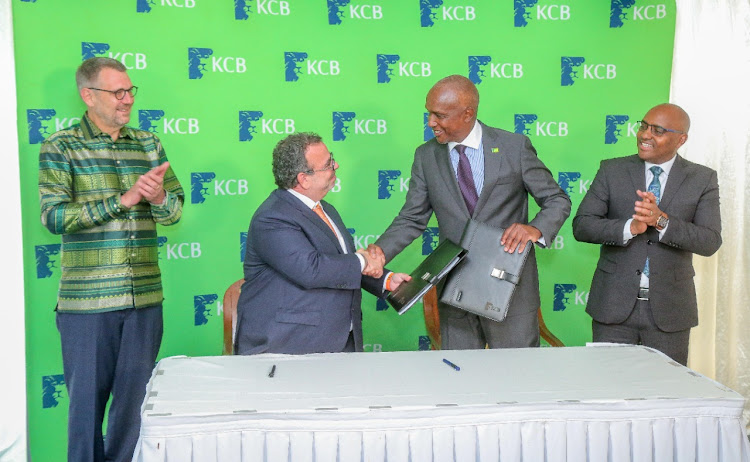 KCB Group is hopes to cut its non-performing loans following the closure of the acquisition of DRC-based Trust Merchant Bank (TMB).

KCB has been posting a higher percentage of bad loans than the industry average, with the percentage rising to 21.5 percent in the half-year results.

“The ratio of non-performing loans in TMB is lower than what we have in the country. We expect that this will dilute the position of the NPLs locally,” said KCB Group Chief Financial Officer Lawrence Kimathi.

Generally, the Asset Quality for the listed banks deteriorated, with the gross NPL ratio increasing marginally by 0.1 percentage points to 12.3 percent in Q3’2022, from 12.2 percent in Q3’2021.

Speaking on the sidelines of a meeting where the group officially announced the completion of the acquisition of TMB, Kimathi said they are looking at the greater value that they will unlock from this deal.

“I’d rather look at what can I generate from this (deal) than how much it has cost,” he added.

KCB Group obtained the regulatory green light in Kenya, the Democratic Republic of Congo and the COMESA Competition Commission, setting the stage for the Group to acquire 85 percent of the shares in TMB.

KCB Group CEO Paul Russo said the transaction would positively contribute towards KCB’s increased scale of operations by establishing its presence in new markets and providing income diversification from a geographical perspective.

Acquisition of TMB has seen KCB increase its presence in six countries including a representative office in Ethiopia.

The group said it is keenly following on the developments in Ethiopia as it seeks to grow its regional footprint.

“Geographically Ethiopia is next. We know they are in the process of changing the law once they are don with that then we will be ready to get into the country,” added Kimathi.

KCB Group will operate TMB with its current brand saying this will build on the strengths of TMB and enable TMB to deliver significant incremental value.

“We see significant business opportunities from this acquisition arising from delivering innovative financial services to customers, growing linkages between customers in our region and realising operational efficiencies which will deliver tangible value to key stakeholders” said Mr Russo.

In the nine months ending September 2022, KCB Group Plc's net profit rose 21.4 percent to Sh30.6 billion on the back of sustained growth from both Net interest and non-funded income lines.

This was a jump from Sh25.2 billion reported for the same period last year.

This comes after KCB Group shareholders had approved a proposal on acquisition of the lender  earlier this year in August. The acquisition is part of ...
Business
1 month ago

Decision seen to be a debt trap for the miller.
Business
1 month ago

This is attributed to  sustained growth from both net interest and nonfunded income lines.
Business
2 months ago
Post a comment
WATCH: The latest videos from the Star
by JACKTONE LAWI
Kenya
19 December 2022 - 18:00
Read The E-Paper