Plans on to first extend the SGR to Naivasha 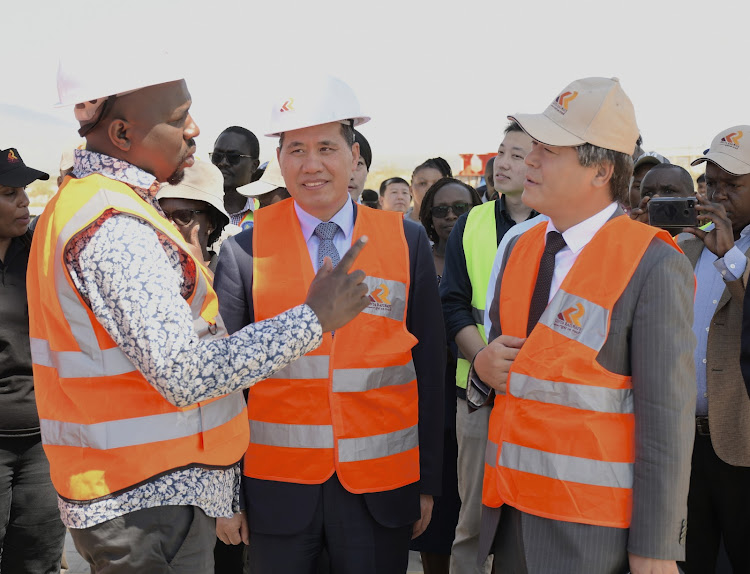 SGR extension The CS for Transport Kipchumba Murkomen engages senior government officers and Chinese ambassador to Kenya Zhou Pingjian (C) during a tour of the Inland Container Depot in Mai Mahiu Naivasha on 15/12/22. He said that the government would engage the Chinese government in extension of the SGR from Mai Mahiu to Malaba.
Image: George Murage

Kenya is seeking a joint partnership with the Chinai for the extension of the Standard Gauge Railway (SGR) from Mai Mahiu to Malaba, Transport CS Kipchumba Murkomen said on Thursday

The five year plan will see the multi-billion railway line pass through Narok, Bomet, Nyamira, Kisumu and finally to Malaba.

Murkomen said the government is keen to revamp railways lines across the country, as their use is cheaper and safer in transportation of goods.

Speaking at the Inland Container Depot (ICD) in Mai Mahiu Naivasha, Murkomen said the government was keen to extend the SGR first to Naivasha town.

“The SGR can first be extended to Naivasha in the next couple of years where passengers can connect to other towns or even use the meter gauge railway line,” he said on Thursday.

He said Kenya is seeking support from development partners in extending the current SGR from Mai Mahiu to Malaba within Kenya Kwanza's term in office.

The CS was addressing the press in Mai Mahiu ICD after launching the multi-million rail mounted Gantry Cranes for transfer of cargo from SGR to Meter Gauge Railway (MGR).

Murkomen defended the move by the government to revert to clearing and forwarding of goods to the Port of Mombasa from the Naivasha Dry Port.

He however said the Naivasha facility was still active.

“We are not kicking out trailers from our roads as they still serve many inland towns but the use of railway will reduce the number of accidents on the road,” he said.

He commended Kenya Railways Corporation for revamping several railway lines and stations across the country.

The CS said the Naivasha Industrial Park is still in government plans with several investors in steel and leather production having shown interest.

Chinese ambassador to Kenya Zhou Pingjian said his country would continue to support Kenya's transport sector and are ready to be involved in the planned extension.

“Kenya is our great friend and we are ready to partner with it in the other transport infrastructure projects including the SGR and roads,” he said.

Post a comment
WATCH: The latest videos from the Star
by GEORGE MURAGE CORRESPONDENT
Kenya
15 December 2022 - 17:00
Read The E-Paper