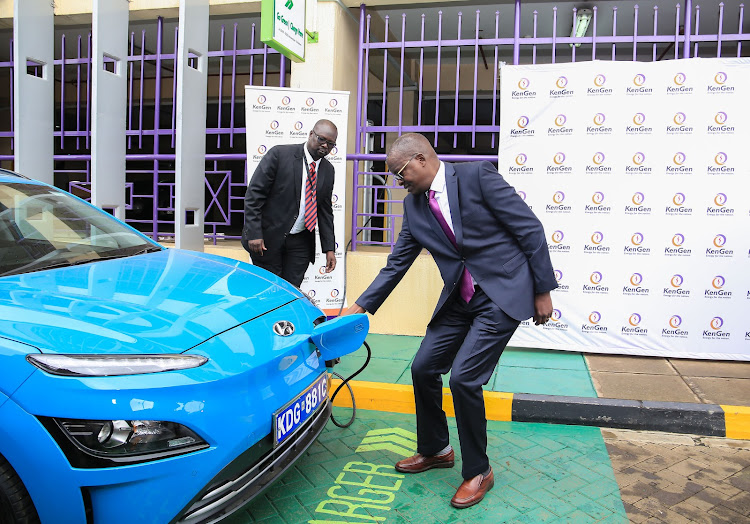 The four vehicles include two SUVs and two double-cabin pickups which will primarily be used for data collection and policy development.

Kengen said the project is aimed at driving Kenya’s shift from gasoline to electric powered vehicles.

It said this in line with combating climate change while solving transportation challenges occasioned by rising fuel prices in the country.

This as the company prepares to install over 30 EV charging stations across the country in 2023.

KenGen’s acting managing director and CEO, Abraham Serem, said that the pilot  units would give them a comprehensive analysis of the feasibility of e-vehicles transition in the country.

He said it would also provide insights on initial technology choices for electric charging infrastructure in the country.

“I am glad to announce that in the next one year, we plan to roll out about 30 EV charging stations in major cities across the country. The four acquired EVs we are launching will give the company first-hand experience and data on electric vehicles,” Serem said.

He said the roll out demonstrates the company’s role in attracting investment funds to finance green initiatives while seeking to collectively work with other stakeholders towards greener transition.

“It also seeks to enable the company save on fuel and maintenance costs, thus creating value for shareholders,” Serem said.

The e-mobility transition plan is part of global trends where countries are racing to phase out gasoline and petrol cars.

France, England, Norway, India, China, USA and the Netherlands are leading with either a goal to stop the sale of internal combustion engines by 2050 or have significant EV sales.

KenGen has two EV charging stations in Nairobi and Naivasha which are not open to the public yet, and plans to install an additional three by end of 2023 in Murang’a, Embu, and Kisumu.

Cycle to work or go electric: Solutions to climate change

This is in line with the e-mobility evolution being eyed globally to tame the tightening fuel economy and increased carbon emissions.
Business
2 months ago
Post a comment
WATCH: The latest videos from the Star
by ALFRED ONYANGO
Kenya
24 November 2022 - 14:00
Read The E-Paper