Most buses have reported lower than usual booking 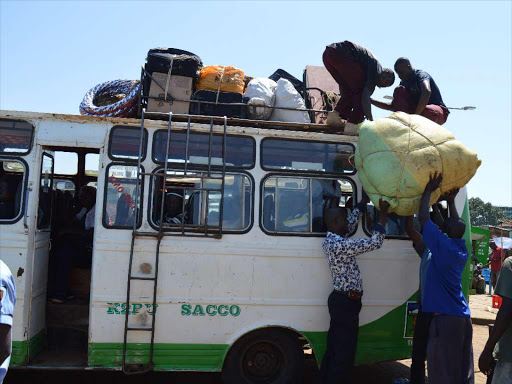 ESCAPING THE CITY: Most residents are travelling upcountry to celebrate the festive season with their families as tye boar at Kisumu bus stage on December 22, 2015. Photo/MAURICE ALAL

Bus, airline and train bookings and fares for the Christmas period are on the rise, a Star survey shows.

While most bus companies have so far have reported lower than usual bookings, operators are hopeful that this will pick from the end of November.

The Standard Gauge Railway train service on the other hand has full bookings for December 23-25 with a few openings between now and then.

Airline fares currently range between Sh7, 000 - Sh10, 000 on most domestic routes but are expected to rise further.

According to Buupass, an online bus booking platform, bookings currently stands at approximately 40 per cent compared to past years, when it stood at about 70 per cent.

This year, the travel sector has been hit by fuel price shocks which has seen public transport actors revise their fares in line with the price regulations from the Energy and Petroleum Regulatory Authority (EPRA).

The latest November revised fuel prices places Super petrol at Sh177.30 per litre, diesel at Sh162 and kerosene at Sh145.94.

Averagely, this is a 41 per cent jump in the fuel prices, which operators have passed on to customers.

A passenger travelling the Nakuru-Kapsabet route to Kakamega using Easy Coach will pay Sh1, 700 in December compared to the current price of Sh1, 550 and Sh1, 400 two months ago.

Eleven-seater vans popularly known as Shuttles such as Transline Classic, Blueline Safaris and North Rift Shuttle also indicated that come December, fares would be revised upwards by a margin of almost Sh500 from the current cost of about Sh1, 400.

An employee at one of the Shuttles said fares could further go upwards to almost double depending on the demand.

Matatu Owners Association chairman, Simon Kimutai said the fare hike by its members during the festive reason is justified.

“Revising fare prices during this period could be justifiable on their end as they seek to meet the transport costs. A vehicle has to make a full round trip in a day whether with passengers or not,” Kimutai said.

He said in most cases, the vehicles come back to Nairobi near empty and hence the fuel cost has to be borne by those travelling to destinations where demand is high.

Travellers opting to fly, mostly to the Coast region will too, not escape paying more.

The cheapest flights to Mombasa for instance, currently ranges between Sh7, 000 and Sh11, 000 for economy class.

This could be because they offer cheaper tickets, at Sh1, 000 for economy and Sh3, 000 for first-class.

The SGR train service has maintained the prices going into the Christmas week, a further reason for almost-full bookings. Passengers are being charged Sh3, 000 for First Class and Sh1, and 000 for Economy Class.

Christmas comes with extra expenses but this could be dampened by the high cost of living this year, which hit a seven-year high of 9.6 percent in October.

According to data from the Kenya National Bureau of Statistics (KNBS) this was largely driven by average cost of food and non-alcoholic drinks, which climbed 15.3 per cent.

The average spending on Christmas is, however, expected to be 1.65 times the country’s average monthly income
Business
2 weeks ago

Why fewer people are spending Christmas with extended family

Covid fears, hiked fare and strained relations among deterrents
Sasa
11 months ago
Post a comment
WATCH: The latest videos from the Star
by ALFRED ONYANGO
Kenya
18 November 2022 - 04:00
Read The E-Paper