•As of Friday, the trucks snarl up had stretched 30 kilometres.

•KRA however says its scanner is in good working condition and fully operational on a 24/7 hour basis. 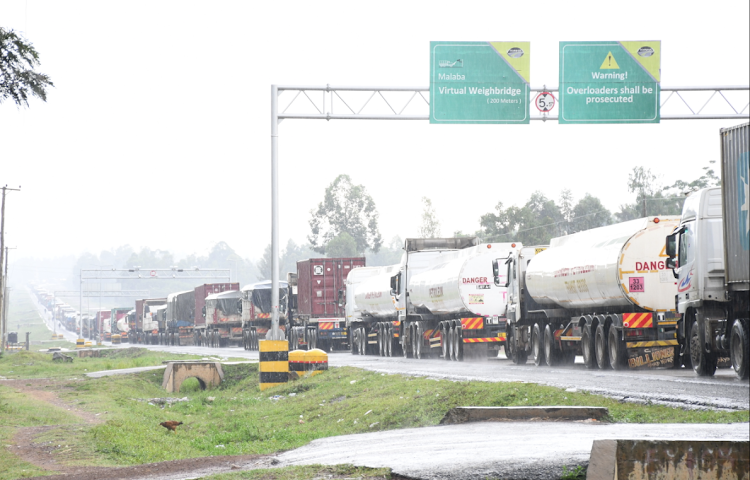 Trucks argo Trucks along the Malaba-Bungoma highway near Malaba town, await clearance to Uganda, on November 16.There has been a long queue for the last four days blamed on slow clearance at the Malaba One Stop Border Post/EMOJONG OSERE

Cargo transporters are facing a clearance backlog at the Malaba border, which is threatening to increase costs and expose importers to higher storage charges.

They have blamed it on frequent downtimes on Kenya Revenue Authority's (KRA) scanner at the border.

KRA has however denied any hiccups with its scanners, both at Malaba and other points of entry and exit including ports.

She said KRA has put in place business continuity plans in the event of downtimes to ensure transporters and importers are not inconvenienced.

The downtimes on the less than three years old drive-through equipment is said to have become persistent in the last three months.

“The scanner keeps on jamming and there is not plan B. Drivers just have to wait,” Kenya Transporters Association (KTA) CEO Mercy Ireri told the Star on the telephone.

As of yesterday, the trucks snarl-up had stretched about 30 kilometres, a situation similar to January this year, when Kenya and Uganda differed on the validity of Covid test certificates for drivers.

The Star has established that the taxman has held two meetings with transporters in the last two weeks, with the latest being yesterday, in relation to the slow clearance at the border.

KRA has been banking on non-intrusive inspection technology such as X-ray or gamma-ray imaging type equipment which gives customs an opportunity to have a quick insight of a container load, without the need to open and unload it.

This helps officers in either confirming or resolving the risk assessment, which reduces the number of unnecessary physical inspections.

Huge investment in non-intrusive tools at the port and borders is key in reducing cargo dwell-time; enhance trade facilitation through faster movement of cargo and enables KRA to collect more revenue.

In June 2005, the World Customs Organisation (WCO) Council adopted the SAFE Framework of Standards to secure and facilitate global trade that would act as a deterrent to international terrorism, help nations to secure revenue collection and promote trade facilitation worldwide.

The Malaba border is the busiest crossing point for trucks using the Northern Corridor, which connects landlocked countries of Uganda, DR Congo, South Sudan and parts of Rwanda to the Port of Mombasa.

Approximately 1,000 cargo trucks pass through the Malaba One Stop Border Post each day, while the one in Busia handles an average of 600 trucks.

Uganda is the biggest destination for transit cargo through Mombasa, accounting for about 83.2 per cent of transit volumes, according to Kenya Ports Authority.

In January, delays at the border affected truck trun-around time between Mombasa and Kampala, which increased to 10 days from 3.5.

“Any delays translate to a cost,” Ireri said, with importers having to pass the final costs to consumers making products costlier.

Logistics costs remain high in Kenya, estimated between 30 per cent to 42 per cent of the goods value, against best global best practice of eight per cent.

According to Shippers Council of Easter Africa Logistics Performance Survey 2021, transport costs stand at $1.8 (Sh 219.56) per km per container, against world’s best practices of $1 (Sh 121.98 ) per kilometre, per container.

With the high fuel costs, there has been a rise in road transport costs.

KRA says expansion will ease congestion at the customs yard during heavy traffic.
Counties
7 months ago
Post a comment
WATCH: The latest videos from the Star
by MARTIN MWITA Business Writer
Kenya
18 November 2022 - 04:00
Read The E-Paper