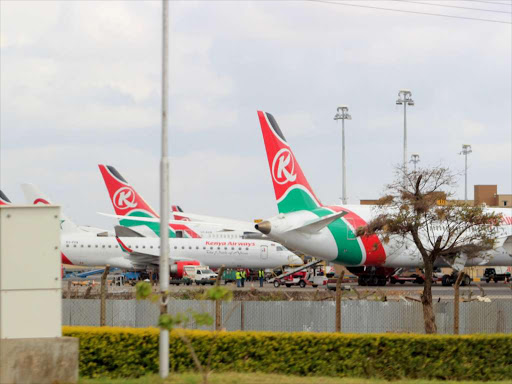 Kenya Airways says it will resume full operations on Saturday, as the pilots’ strike that paralysed the airline operations ended on Wednesday.

“Dear Customer, we look forward to welcoming you back on-board with normal flight operations resuming by the 12th of November 2022,” Kenya Airways said in a communication to its customers.

The Kenya Airline Pilots Association (KALPA) called off the strike after the Employment and Labour Relations Court ordered the pilots to resume work.

The pilots’ association had initially defied a court order preventing the industrial action.

KALPA accused the airline of pilot victimisation and harassment as well as unilateral withdrawal of the staff provident fund, non-adherence to Kenya Civil Aviation Regulations, and leadership and governance challenges.

However, after four days of stalemate, the Labour Relations Court judge Anna Mwaure on Tuesday ordered KQ pilots to resume duties by 6am on November 9, 2022, unconditionally.

Following the directive, Kenya Airways on Tuesday night said 23 pilots were available for duty with the airline commencing disciplinary process for the pilots who had not reported on duty as per their rosters.

“The company is also pursuing contempt of court proceedings against the KALPA executive committee, jointly and severally, for breaching the Court Order for taking part in and inciting its members to participate an unlawful strike, causing immense revenue losses to the company, damaging the image and reputation of the company, as well as national and economic sabotage," Kenya Airways Group Managing Director and CEO, Allan Kilavuka said.

In the past three days, the strike has disrupted travel plans for over 12,000 customers across KQ network, forced the cancellation of over 300 flights and affected 3,500 other employees.

The tussle between the pilots and the state was escalated earlier in the week after the Transport and Labour ministries failed to broker a deal prompting the intervention of the court.

The aviation sector woes were further deepened after Kenya Aviation Workers Union (Kawu) also asked their members to down their tools over Kenya Airport Authority’s failure to conclude and implement a collective bargaining agreement (CBA), which was negotiated and agreed upon in 2019.

Kalpa on Tuesday night called off the strike and urged their members to resume duty on Wednesday.

General secretary and CEO Murithi Nyagah, said members should report to the executive council any incidents of victimisation or disciplinary action taken against them contrary to the court orders.

The five–day strike has seen more than 300 tonnes of perishable cargo rot at the airport and thousands of passengers stranded after flights were cancelled.

The Agriculture Cabinet Secretary Mithika Linturi yesterday said that the fresh produce industry had suffered losses of over Sh200 million.

“The industry is still facing many challenges including the ongoing strike. The government is however working on a temporary measure to avail special planes to avert further losses,” Linturi said.

The setback comes even as horticultural exports remain a key revenue stream for the government.

Fresh Produce Consortium of Kenya (FPCK's) CEO noted that on the bare minimum, its members have been losing at least Sh45 million in revenues every day.

The strike has been a big blow to the horticulture sector coming during the high season when countries are placing orders ahead of the festive season and Valentine’s Day next year.

The strike came at a time that the rising global fuel prices inflicted a ninth consecutive half-year loss on the national carrier which has been surviving on State bailouts.

The national carrier has benefited from several State bailouts, the latest being Sh20 billion in the supplementary budget before the National Assembly.

The airline attributed the loss to high fuel cost that saw the airline spend Sh11 billion during the period pushing its operational costs to a five year high of Sh57 billion.

He warned that the airline risks sinking deeper into losses if its affairs continue to be politicised.
News
1 month ago
Post a comment
WATCH: The latest videos from the Star
by JACTONE LAWI
Kenya
09 November 2022 - 17:34
Read The E-Paper