How managers at Metropolitan Sacco sank it into Sh12bn loss

•The Commissioner for Co-operative Development’s office has since recommended investigation on past leadership and possible prosecution.

•This comes amid efforts to recover lost members’ deposits. 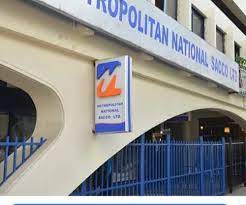 An investigation by the government has revealed a massive plunder at the Metropolitan National Sacco, as a probe is initiated on its past management of losses totalling Sh12 billion.

Those under the spotlight are former board of directors and heads of departments who served between 2010 and 2021.

They are led by former CEO Francis Ng’an’ga and his predecessor Benson Mwangi who has since been kicked out of office, as a caretaker committee takes over management for the next three months.

Also being investigated, for necessary action, are staff who served during among them head of finance, head of internal audit, head of ICT, risk and compliance and head of credit.

The government set up a team of top co-operative sector officials to investigate the financial and governance structures of the teachers-owned Sacco in April this year, following an uproar by members who pointed to mismanagement and embezzlement of funds.

In a gazette Notice No 4558 dated April 22, 2022 the Commissioner for Co-operative Development David Obonyo directed a probe into the by-laws, working and financial conditions, management, and the conduct of both present and past directors of the sacco.

A report from the investigation now points to cooking of the Sacco’s books to indicate its balance sheet was strong, while deposits were being embezzled.

The interest income reported in the last 24 years, between 1987-2021 totalled Sh16.2 billion, when the cumulative income for the same period was estimated at Sh6.8 billion , a variance of 9. 4 billion.

The investigation unearthed dealings in land where property was never acquired in some cases.

In October 2014, an investment arm known as Metropolitan Investment Corporative Society Limited was formed with a seed capital of Sh1.01 billion invested.

This was done without members approval with funds being transferred in form of “irregular loan disbursement, cheque and cash deposits, and drawings from the FOSA account.

Out of the amount invested in the investment arm, only Sh310.4 million was used to purchase land in Kitengela, the audit outcome read to members by SACCO Societies Regulatory Authority (SASRA), during a recent meeting, revealed.

About sh703 million remains unaccounted for.

The Sacco further disbursed an additional Sh190 million towards a land investment on a parcel that had already been fully paid for.

“The team that takes over will be mandated to investigate where the remaining money went to,” manager, licensing and regulation David Kahuthu said.

Another case of a flagged misappropriation is where over Sh80 million was used for repairs and maintenance of a branch in Nairobi.

In November 2021, management outsourced ICT services for Sh12.4 million against an approved budget of Sh2 million.

Another case is the withdrawal of Sh564 million through tellers, monies that can not be accounted for.

In its Nakuru branch, there was a Sh49 million withdrawal meant for Mpesa float for disbursement of loans to members.

The Commissioner for Co-operative Development’s office has since recommended investigation on past leadership and possible prosecution, amid recovery of lost members’ deposits.

"You will held accountable.You can run but you cannot hide…It is painful when you tighten your belt, deny yourself and someone takes advantage of that to have a luxurious life,” director of co-operatives Nairobi county, Delphine Aremo, said to the suspended and previous management of the Sacco.

Meanwhile, the Sacco is currently struggling with non-performing loans, which the regulator wants recovered, even as disposal of non-core assets is being sought to raise additional working capital.

Hundreds of millions disabused as loans to members remains untraced.

It has also recommended that the Sacco stops investing and acquisition none-core assets or any asset that does not relate to the main business of the society.

Payment of bonuses, salaries t staff and other compensations have also been suspended until liquidity position improves.

The human resource department has also been asked to review staff salaries and expenditure.

Sacco officials who have left with a loan or cash will also be pursued.

Post a comment
WATCH: The latest videos from the Star
by MARTIN MWITA Business Writer
Kenya
08 November 2022 - 04:00
Read The E-Paper