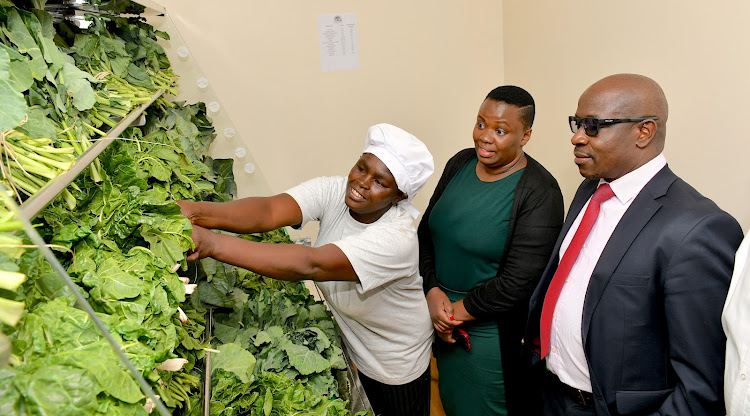 FRESH FOOD The newly opened ‘Vasha-Greens’ which has been constructed through the support of World Wide Fund for Nature. Fresh produce farmers are loosing millions everyday due to ongoing strike by Kenya Airways pilots.
Image: GEORGE MURAGE

Fresh produce farmers are warning over looming job losses in the sector due to the ongoing strike by Kenya Airways pilots.

The farmers noted that they were incurring losses running to millions everyday due to lack of cargo space, even as freight charges doubled due to the impasse.

Through the Agricultural Employers Association (AEA), they have called for a quick solution to the strike warning that gains made in the sector after the pandemic could be wiped out.

Kenya Airline Pilots Association (KALPA) called for an industrial action, which started on November 5, demanding for the reinstatement of contributions to their provident fund.

They further demanded the payment of all salaries stopped during the Covid-19 pandemic while accusing the KQ management of "intimidation and unfulfilled promises."

According to AEA chief executive Wesley Siele,  farmers are losing over Sh200million every day due to the impasse.

Speaking on Tuesday, Siele noted that flower farmers that were using KQ freight services were also affected by the strike adding that there was urgent need to end the strike.

“We are deeply concerned by the ongoing strike as it has affected the exportation of fresh produce leading to major losses,” he said.

Siele added that air-freight charges had risen from $1.75 to $3 per kilo due to the strike, charges that many farmers could not afford.

“Due to a demand in cargo space among other airlines, the prices have nearly doubled and we fear this could rise further in the coming days if the impasse is not resolved,” he said.

While calling for concerted efforts to resolve the strike, Siele said that the strike was not only hurting farmers but also the economy.

Earlier, the Institute of Human Resource Management (IHRM) had accused the Ministry of failing to engage an arbitrator, after talks between the State and the pilots collapsed.

According to IHRM Chairman Phillip Odera, there was a need for both sides to engage independent bodies in their negotiations.

Odera also hit out at KALPA for walking out of the talks terming this as an act of defiance and a sign of ill-will, and bad intention to an overture already extended by the government.

“We have assembled a team of experts conversant with industrial disputes and is ready to deploy it for mediation between the pilots, the State and the management of Kenya Airways,” he said.

Post a comment
WATCH: The latest videos from the Star
by GEORGE MURAGE CORRESPONDENT
Kenya
08 November 2022 - 15:20
Read The E-Paper