This is for his contribution to the banking sector and economy.

•Muriuki’s career in the banking sector spans over three decades.

•He was appointed CEO amidst shareholder revolt following an historic Sh2.3 billion loss that the bank reported in 2001. 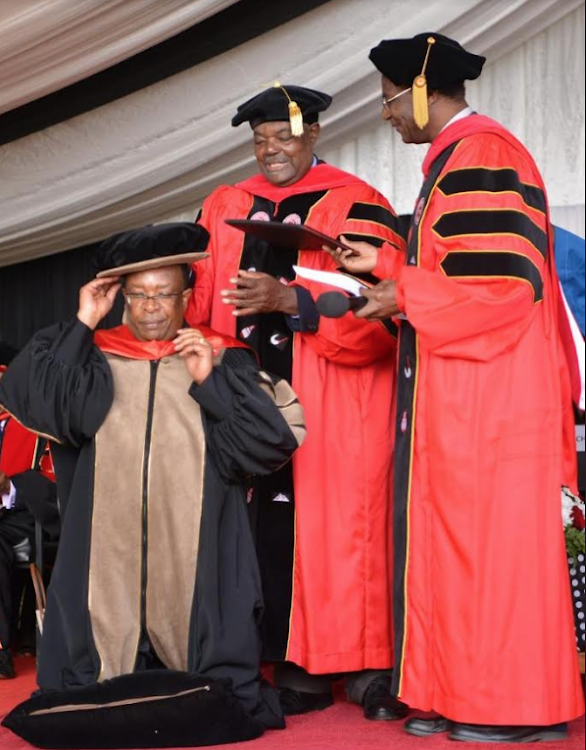 Cooperative Bank of Kenya Group managing director and CEO Gideon Muriuki has been conferred with his thirds honorary doctorate, for his work in the banking sector.

He has been conferred the Doctorate of Humane Letters (Honoris Causa) DLitt of Africa International University.

Muriuki’s career in the banking sector spans over three decades, having started his career as a graduate trainee at the then Barclays Bank in 1989.

His leadership at Co-operative Bank has been termed transformational as the lender continues to support growth of businesses, including SMEs and economic empowerment of the co-operative movement in the country.

He was appointed CEO amidst shareholder revolt following an historic Sh2.3 billion loss that the bank reported in 2001.

Despite a legacy of formidable challenges including huge levels non-performing loans, weak management controls and fierce competition in the industry, Dr Muriuki progressively steered the bank out of near-collapse to achieve record profitability,” the citation reads in part.

The bank reported a Sh22.6 billion profit for the year 2021, the best performance ever.

Muriuki in his transformation agenda has maintained a strong belief in the great potential of the cooperative movement to deliver inclusive growth.

The Co-operative Bank is now supporting wholesale and retail banking linkages with the over 15-million-member co-operative movement, through the over 22,000 co-operative societies that cut across every sector of the economy in Kenya.

To ensure the long-term sustainability of the Co-operative movement, Muriuki in 2003 established Coop Consultancy Services Limited.

The Co-op Consultancy team of over 20 consultants has executed about 1,000 mandates in the last five years, which has helped co-operatives not only adopt viable operating models but also become more competitive in the marketplace.

The Cooperative Bank Group has continued with a strategy for continued deepening and dominance in its domain market segment, while harnessing sustainable opportunities for expansion to other services like BancAssurance, and leasing business which are being done through its various subsidiaries including Kingdom Bank Limited.

Kingdom Bank Limited is a fully-fledged Commercial Bank, licensed and regulated by the Central Bank of Kenya, with over 444,000 customers in 17 branches.

He solidly supported the recapitalisation of CIC Insurance Group which is majority-owned by the co-operative movement, with Co-op Bank as the largest and strategic shareholder in CIC with a 24.8% stake.

Co-op Bank has also maintained linkages with the Co-operative University of Kenya, a premier institution of higher learning in cooperative training, research, and consultancy.

Muriuki has also supported the recovery of agricultural marketing co-operatives, especially coffee societies which had long-suffered the effects of the 1990’s global price collapse.

In 2007, in his focus to supporting the cooperative movement, the bank invested in a switch, named Coopswitch, which interlinks the banking systems of Saccos with those of the bank.

This enables SACCO members to access the Visa network worldwide.

Today, Co-op Bank under Muriuki has built a compelling value proposition for the Micro, Small and Medium-sized Enterprises (MSMEs) that ranks it as the leading bank in that space.

In the first six months of this year alone, it had disbursed Sh12.6 billion to MSMEs through the Mobile E-Credit solution.

The bank is now the leading bank in supporting MSMEs receive Lipa Na Mpesa payments, which saw the bank process in excess of Sh 500 Billion last year while this year the bank is processing an average of Sh 65 Billion Lipa na Mpesa payments every month.

"AIU, therefore, recognises and celebrates the remarkable story of an institutional transformation in the leadership of Dr. Muriuki,” the institution said.

Muriuki led in the increase in Loans and Advances from Sh15 billion in 2001, to over Sh300 billion in 2021.
Business
9 months ago
Post a comment
WATCH: The latest videos from the Star
by MARTIN MWITA Business Writer
Kenya
07 November 2022 - 04:00
Read The E-Paper