Trade ministers held virtual meeting on Friday ahead of US summit.

•President Ruto will he heading to Washington for the US-Africa Leaders Summit in December.

•Trade, Investments and Industry CS Moses Kuria and US Trade Representative Katherine Tai are expected to meet on the sidelines of the forum. 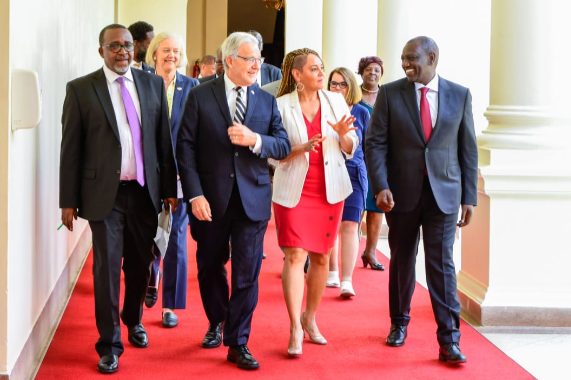 Kenya and the US will be taking another shot at the dragging trade talks with hopes of reaching a deal before the year 2025.

This is when the African Growth and Opportunity Act (AGOA) lapses.

AGOA eliminates import tariffs on goods from eligible African nations, with its coming to an end putting countries under pressure to secure a pact that will see them continue to enjoy preferential trade terms.

President William Ruto’s warm relationship with the US is seen as a possible catalyst for the process, which has suffered back-to-back delays as a result of administration changes.

This however stalled this year when Kenya went into an election, which saw President Ruto elected.

In what would be a sign of goodwill by Biden to push for more trade collaboration with Kenya, the US President sent Trade Representative Katherine Tai to lead the country’s delegation to Ruto’s inauguration on September 13.

The President has since then hosted at least two delegations from the US at State House Nairobi.

The latest was on Monday when he met a US delegation led by US Deputy Secretary of Agriculture, Jewel Bronaugh.

"Kenya is ready for more trade deals with the US under the AGOA programme,” Ruto said.

During the virtual meeting, Kuria and Tai shared the objectives of the two governments as reflected in the joint statement launching the Kenya-United States Strategic Trade and Investment Partnership on July 14.

The two discussed opportunities to engage in the near future “to pursue a strong working relationship that advances common goals”.

This includes expanding bilateral trade with benefits that are broadly shared, inclusion of women, youth and others in trade, Kenya’s trade ministry said in a statement.

Kenya and the US are also keen on supporting growth of SMEs as well as advancing the African continental trade integration.

“The two expressed an interest in meeting in person in Washington in December on the margins of the upcoming United States-Africa Leaders Summit,” Kenya’s trade ministry said.

President Biden will be hosting leaders from Africa in Washington, DC on December 13-15, for the U.S-Africa Leaders Summit, which Ruto on Monday also said he was looking forward to, with expected talks on expanding trade between Kenya and the US.

This gives fresh energy to the talks which if they start in December or early next year, the two countries could have a deal by the year 2024.

“It takes up to two years to have a complete FTA (Free Trade Agreement),” a trade expert within the ministry told the Star.

The AGOA program gives Kenya and 40 other sub-Saharan African countries duty-free access to the US market for over 6,000 products.

Some of the areas of interest as Kuria takes over the talks from his predecessor Betty Maina, includes agriculture.

This is mainly on the application of science- and risk-based Sanitary and Phytosanitary (SPS)measures.

The two sides share an interest in fostering sustainable agricultural practices, as well as creating an enabling environment for innovative agricultural technologies.

There is also focus on fighting corruption.

The talks are also expected to include digital trade where Kenya and the US share an interest in fostering consumer, business, and worker trust in the digital economy, ensuring access to information, promoting the development and use of resilient and securing digital infrastructure.

Customs practices, transparency and cooperation on customs enforcement to inform mutual understanding, including an agreement on mutual assistance between their customs administrations, signed in Washington on August 6, 2014.

They will also explore other topics of engagement, including trusted trader benefits for demonstrated low-risk importers, particularly those that participate in their respective country’s authorised Economic Operator (AEO) program.

US trade delegation in Kenya to explore openings

The mission will engage over 500 local entrepreneurs, MSMEs and corporates with an aim to boost bilateral trade between the trading blocks.
Business
1 month ago