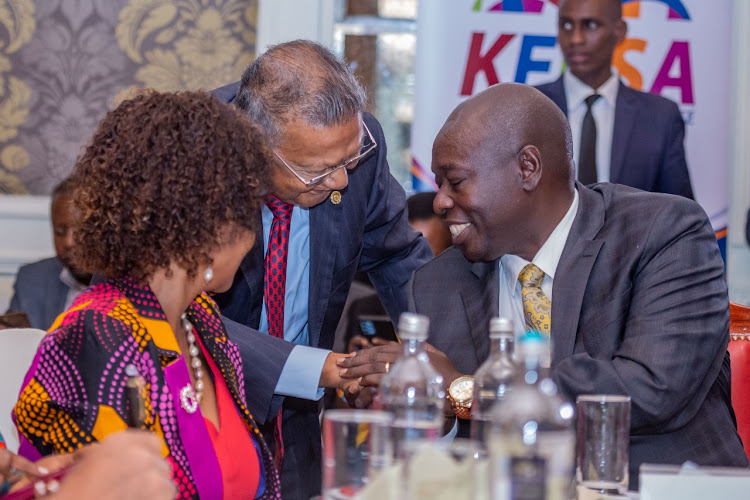 Manu Chandaria and Kepsa chairperson Flora Mutahi, during the launch of the Kenya Youth Employment and Entrepreneurship Accelerator Program (K-YEEAP) on October 31, 2022.

The rising inflation slowed activities in the country's private sector, with the performance index in October dropping by 1.5 per cent.

The latest Purchasing Mangers Index (PMI) by Stanbic Bank shows the performance dipped to 50.2 points compared to a seven-month high of 51.7 points recorded in September.

Readings above 50.0 signals an improvement in business conditions on the previous month, while readings below that shows a deterioration.

"Kenyan private sector businesses saw only a mild improvement in operating conditions in October.  Ongoing concerns about the rising cost of living led to a softer expansion in new orders and a renewed drop in output," says the report

The tightening of global monetary policies is having a direct impact on the cost of living especially in developing countries.  The base lending rate hikes have devalued weak currencies with importers forced to pass the rising import bill to consumers.

The Kenya shilling has sunk almost seven per cent in just a year to hit a new all-time low of 121.50 on Thursday as the US raised the fed rate for the fourth consecutive time.

Although the overall index dropped, employment continued to rise amid increased backlogs, with firms the most upbeat about the outlook for activity since July 2021.

The upturn in employment accelerated slightly from the previous survey period, but remained well behind its long-run trend. While some firms added to their payroll numbers to support workloads, others reported staffing cuts due to a decrease in output.

Staff costs at Kenyan businesses increased for the eighth month in a row in October, amid reports that higher living costs drove companies to offer increased salaries to their workers.

That said, the rate of wage inflation softened from the previous survey period and was slowest since March.

Backlogs of work in the Kenyan private sector rose slightly during October, extending the run of accumulation to five months.

The sustained rise in new business was cited by panellists as the key driver of capacity pressures.

Backlogs increased in the agriculture, manufacturing and construction sectors, but fell in services and wholesale & retail.

At the same time, inflationary pressures remained severe, as firms highlighted a record increase in purchasing costs from the previous month.

It rose sharply to its highest reading in the survey's history in October, marking a substantial increase in purchase costs at Kenyan firms.

Approximately 41 per cent of respondents saw purchase prices increase over the month, amid reports of higher fuel costs, a deteriorating exchange rate against the US dollar, and shortages of items such as timber and animal feed.

By contrast, just two per cent of companies recorded a decline.

In a bid to protect profit margins, output charges were raised at the quickest rate since June.

Kenyan companies reported another sharp increase in their input costs in October, with higher expenses most commonly linked by panellists to fuel and material price hikes.

While remaining firmly above the survey trend, the rate of input price inflation nonetheless softened from September and was below the average seen in 2022 so far.

Total expenses rose all five monitored sectors over the month, with agriculture registering the fastest inflation.

New order inflows remained in growth territory in October, following a renewed expansion in the previous month due to the end of the election period.

Some firms continued to mention this as a factor behind higher sales, as well as new projects and increased marketing.

However, while 30 per cent of panellists saw new orders increase, 28 per cent registered a reduction that was often due to rising living costs.

Subsequently, the rate of new order growth slowed from September and was only mild.

Agriculture and manufacturing were the only areas to record growth. Inflationary pressures negatively impacted business activity in October, as some respondents noted reduced capacity due to high running costs.

Businesses reported a greater emphasis on the building of input stocks during October, with some linking this to fears that material prices will rise further.

As a result, the seasonally adjusted Stocks of Purchases Index rose to its highest level in almost two years, indicating a sharp rise in inventories overall.

Around 18 per cent of firms reported higher stocks, against five per cent that saw a decrease.

Commenting on the survey, Mulalo Madula, an economist at Standard Bank said if price pressures persist and firms continue to pass on a higher share of rising input cost burdens to output charges, demand may weaken in the short to medium term

"This is likely to slow  the overall rate of improvement in Kenya's business environment," Madula said.

Economist Daniel Ambuko is however optimistic that the sector will stabilise starting January as the global market corrects.

"The current shifts in the global money market as a result of monetary policy hikes is likely to end this month. This will set the market for correction, with projections pointing to a better 2023,'' Ambuko said.

Business confidence dropped to a record low
Business
5 months ago