The negotiations which started in July 2020 were disrupted by elections, Covid.

•President Biden will be hosting leaders from Africa in Washington, DC on December 13-15, for the U.S-Africa Leaders Summit.

On Monday, Ruto said he is looking forward to the summit and that Kenya is ready for more trade deals with the US . 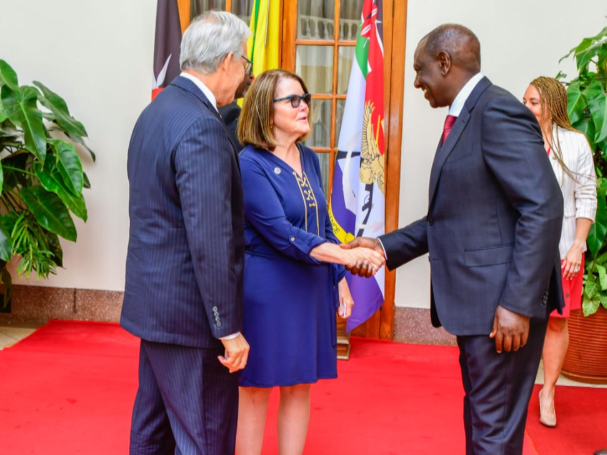 Kenya could finally jump start its stalled trade talks with the US in December, during a planned visit by President William Ruto.

Elections and change of administrations in both countries disrupted the talks which begun in July 2020 during former Presidents Donald Trump and Uhuru Kenyatta’s tenures.

This however stalled this year when Kenya went into an election, which saw President Ruto elected, with little engagement during the transition period.

On Monday, the President said he was looking forward to the US-Africa Summit in December to discuss expanding trade between Kenya and the US.

President Biden will be hosting leaders from Africa in Washington, DC on December 13-15, for the U.S-Africa Leaders Summit, , signalling it could also be the launching pad for the stalled talks.

"Kenya is ready for more trade deals with the US under the AGOA programme,” Ruto said when he met a US delegation led by US Deputy Secretary of Agriculture, Jewel Bronaugh, at State House, Nairobi.

Ruto said Kenya has plenty more to offer the United States as a trade partner.

The government has been keen to secure a free trade pact ahead of the lapse of the African Growth and Opportunity Act (AGOA) in 2025, which eliminates import tariffs on goods from eligible African nations.

The new Trade, Investment and Industry Cabinet Secretary Moses Kuria is expected work closely with the US trade representative Katherine Tai to revisit the talks, taking over from where former CS Betty Maina left.

Kuria has hit the ground running and was on in Pretoria on Sunday where Kenya is holding bilateral trade and investment talks with South Africa.

[PHOTOS] Ruto says Kenya ready for more deals with US

He said Kenya has plenty more to offer the United States as a trade partner.
InPictures
3 weeks ago

US trade delegation in Kenya to explore openings

The mission will engage over 500 local entrepreneurs, MSMEs and corporates with an aim to boost bilateral trade between the trading blocks.
Business
3 weeks ago
Post a comment
WATCH: The latest videos from the Star
by MARTIN MWITA Business Writer
Kenya
01 November 2022 - 12:40
Read The E-Paper