KQ's 400 pilots to down tools on Wednesday

Last week, talks between the management and Kalpa hit a dead end 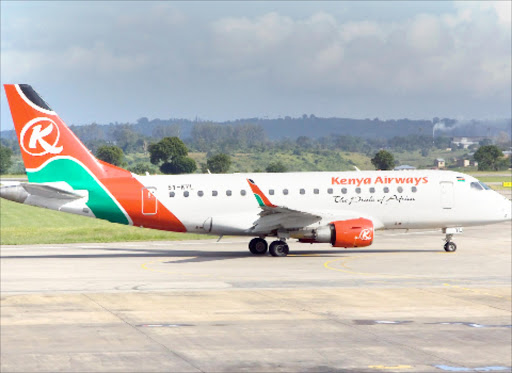 Operations at Kenya Airways (KQ) could be disrupted starting Wednesday as over 400 pilots commence their strike after talks with the management failed.

Speaking exclusively to the Star, the Kenya Airline Pilots Association (Kalpa) secretary general captain Murithi Nyaga said the airline's management has turned a blind eye to their concerns since mid-2020.

''It is high time to make a tough decision to change administrative indiscipline at KQ. None of our members will report to duty on Wednesday if our grievances are not met,'' Nyaga said.

Last week, the pilots' lobby gave KQ 14-days to reinstate the staff provident fund which was withdrawn in July 2020 as Covid-19 squeezed the airline's revenue.

According to Kalpa, the airline owes its members at least Sh700 million plus interest.

On the Provident Fund, the association said the act is a violation of the terms and conditions of service of its members and clause 38(a) of the CBA in force between the association and KQ.

According to Murithi, the retirement scheme was withdrawn in July 2020 on the grounds that the company did not have money without prior consultations.

According to him, the company is making money, all flights are full and are charging heavy airfares yet they have declined to reinstate the provident fund.

He said pilots unlike other employees have no pension on which they can fall back upon retirement.

KALPA claims some of the KQ managers have taken to harass lobby officials in order to curtail the union's activities.

"They have declined to honour even recommendations of intermediates from the Ministry of Labour and even taken unilateral action to sack members of the executive council and as we speak there is an ongoing victimisation of them,’’ he added.

He said the KQ management has also continued to blatantly breach and abuse the Kenya Civil Aviation Regulations (KCARs), certain clauses in the CBA and legally binding agreements with impunity.

These include local night violations contrary to Regulation 251 of KCARS, the appointment of unqualified office holders in contravention of Regulation 14 Air Operator certification and Administration of KCARS.

They now want top KQ officials to resign, saying that it is the only way to effect sound turnaround plans at the airline which Kalpa fully supports.

"We ask KQ CEO, operations director, fleet manager and chief pilot to exit the stage and allow more competent people to drive the airline back to profitability,'' Nyaga told the Star.

Early last week, KQ CEO Allan Kilavuka said he was ready to let go of defiant pilots if they fail to agree.

''There comes a time to make a tough decision. We cannot allow a few individuals to curtain our restructuring plan that seeks to drive the airline back to profitability,'' Kilavuka said.

He accused the pilot's lobby of not being ready to negotiate, saying a mediation attempt by the Central Organization of Trade Unions (COTU) boss on Tuesday last week failed.

Even so, on Friday, he changed the harsh tone, asking the planned strike will sabotage the airline's recovery.

In a note to the staff, Kilavuka requested employees be patient as the company reorganizes its financial position.

He expressed commitment to ensuring the resumption of Provident fund contributions, cited as one of the causes of the planned strike, for all staff.

This is the latest row pitting the pilots against the KQ management, a move that could potentially derail the airlines' recovery plans.

The airline, which has been surviving on State bailouts since the Covid-19 pandemic, reported a Sh9.8 billion loss in August — a better performance than the Sh11.48 billion loss it recorded in the same period a year earlier.

Please be patient, KQ CEO pleads with staff ahead of strike

KQ to fire pilots who take part in planned strike

KALPA says it sought audience with management to no avail.
News
1 month ago

KQ chair dismissed claims that they were over charged on market rate fees for services.
News
1 month ago

KQ seems to be on the right path

Its revenue grew 76 per cent to Sh48.1 billion.
Opinion
3 months ago

Its revenue grew 76 per cent to Sh48.1 billion.
Business
3 months ago
Post a comment
WATCH: The latest videos from the Star
by VICTOR AMADALA Business Writer
Kenya
30 October 2022 - 21:00
Read The E-Paper