I steered Kenya out of corona - Yatani

He assumed office in January 2020, few days before Covid-19 struck 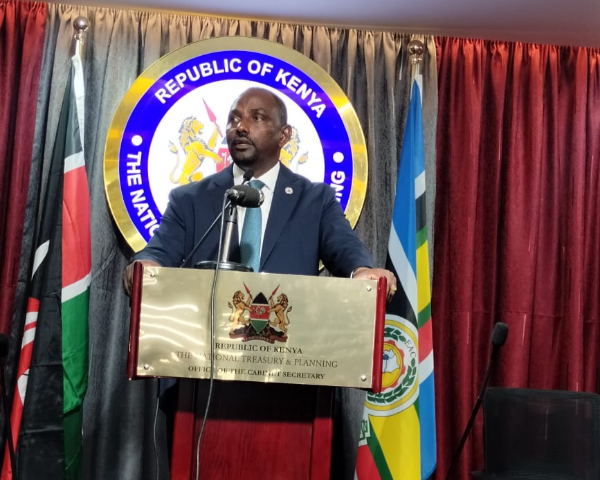 Outgoing National Treasury Cabinet Secretary Ukur Yatani is satisfied with his steering of the country through the Covid-19 pandemic.

On Thursday, Yatani spent his last day in office with financial journalists, taking stock of his three year at the Exchequer. He assumed office in an acting capacity in mid-2019, a few months before Covid struck.

He handled the Labour and National Treasury dockets before being confirmed to steer Kenya's economy in January 2020.

''We have not only done the best but also performed beyond expectations under a very difficult environment that has very little to do with Kenya. Covid-19 was an exceptionally new phenomenon,'' Yatani said.

He said Kenya's economy was poised for greatness in 2020, projecting a 5.6 per cent growth from 5.1 per cent the previous year before the pandemic eroded the gains.

In 2020, the country's economy recorded a negative growth, the worst in 12 years.

Data from the Economic Survey shows the country's economic growth shrunk to negative 0.3 per cent as the education, tourism and transport sectors ground to a near halt

East Africa’s biggest economy last contracted in the third quarter of 2008 after post-election violence causing a decline in output of 1.6 per cent.

According to Yatani the pandemic forced countries to quickly recalibrate their fiscal policies to save their economies from imminent collapse.

"We painfully but successfully navigated that phase. I exit office head high, knowing that I did my best under the stewardship of President Uhuru Kenyatta's administration,'' Yatani said.

Last year, Kenya’s economy rebounded to grow at the fastest pace in 11 years on the easing of Covid-19 restrictions which boosted recovery in key sectors excluding agriculture whose activities were hit by poor rainfall.

Economic activities expanded 7.5 per cent compared with a contraction of 0.3 per cent a year earlier when activities almost grounded to a halt because of measures to contain the spread of the pandemic.

This was the highest expansion since 2010 at 8.1 per cent when economic activities were recovered from the aftermath of the twin shocks of the global financial crisis and post-election skirmishes in 2008 followed by a biting drought in 2009.

Yatani said Kenya's debt is highly sustainable, asking his predecessor not to reinvent the wheel.

''Our debt profile is quite convincing in the eyes of international creditors because we borrowed prudently. Commercial loans were cut significantly in favour of cheaper multilateral ones. We have never defaulted on our obligations,'' Yatani said.

He stressed on the need to borrow, saying that the country has improved its infrastructure in the past decade.

''I can now travel to Marsabit and back in a day. The road network has sprouted economic activities for the people. Borrowing is not bad as long as it is within means and for a noble cause,'' Yatani said.

He however acknowledged that the government was a little bit over ambitious in its development agenda, a move that saw the country accumulate high debts.

His claims on debt sustainability are however countered by various international lenders and credit rating firms, with Moody's, S&P and IMF downgrading the country's creditworthiness.

He will today hand over office to ex-CBK governor Njuguna Nd'ung'u who has promised to further cut the country's debt burden.

I exit Treasury with my head high, I did my best - Ukur Yatani

He was the last Treasury CS under the Uhuru Kenyatta administration.
News
1 month ago

The amount was equivalent to 2.15 per cent of the GDP
Business
1 month ago

The International Monetary Fund (IMF) maintains Kenya is among countries with a high risk of debt default, even as the National Treasury puts up a ...
Business
1 month ago

He takes over an economy crippled with debt, inflation, joblessness, high cost of basic commodities.
News
2 months ago
Post a comment
WATCH: The latest videos from the Star
Kenya
28 October 2022 - 04:00
Read The E-Paper