This will reduce the over dependency on rain-fed agriculture.

•Government to work with public-private partnership to facilitate the projects. 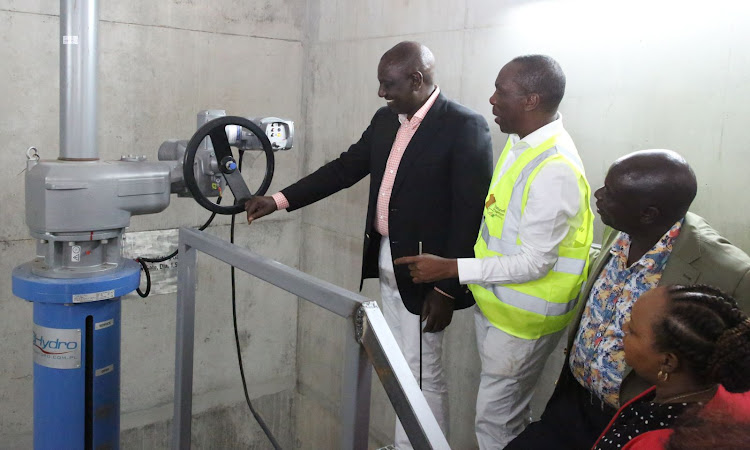 President William Ruto during the commissioning of Thiba Dam on October 15, 2022
Image: PCS

The government plans to construct 100 large dams in the country to boost water harvesting for agricultural purposes, President William Ruto has said.

This is part of his government's plans to shift the country from over dependency on rain- fed agriculture to irrigation in order to enhance food production.

Kenya has experienced cyclic droughts leading to  a major shortage of food and pasture.

The government has always had to step in to provide relief food.

Ambitious irrigation projects such as the Sh7.2 billion Galana Kulalu, a food security project by the government has failed to yield much, something that Ruto plans to change.

“We will also construct more small capacity dams because we want to harvest water at every level so that we the citizens can have water for domestic use,”Ruto said.

He spoke on Sunday during a church service at African Inland Church Kitui Township.

The President’s announcement could lift the freeze put in place in 2020 on new projects.

According to the National Treasury, there were about 545 stalled government projects valued at Sh365.9 billion.

Most affected were irrigation projects where 193 had stalled in a Sh5.5 billion budget.

“The government has been pumping billions into poorly planned and inflated projects which are not realised or fail to give value for money,” outgoing Treasury CS Ukur Yatani had indicated.

Some of the mega dam projects that had stalled includes, Badassa dam (Marsabit) and  Umaa Dam(Kitui) valued at Sh6.4 billion.

“Im going to work with the county governments so that we can have a program of harvesting water at every level and facilitating our farmers to use that water for food production so that we stop importing food and we promote the develop of our economy,” he said.

He said the government would also explore public-private partnership to facilitate the construction of the dams at all levels.

Last week, the president  commissioned the Sh7.8 billion Thiba dam in Kirinyaga county which will also be used for supplying water for irrigation.

The new dam is expected to give the 30,060-acre Mwea irrigation scheme a lifeline and an additional 10,000 acres to be flooded for rice farming.

The dam will help secure a full year-round water supply for the country’s agriculture department with rice farmers set to be the biggest beneficiaries.

They including construction of 100 dams and plantation of 5 billion trees.
News
1 month ago

They have established illegal takeovers of their assets in different parts of the country.
Counties
1 year ago
Post a comment
WATCH: The latest videos from the Star
by VICTOR MUKABI
Kenya
24 October 2022 - 17:00
Read The E-Paper