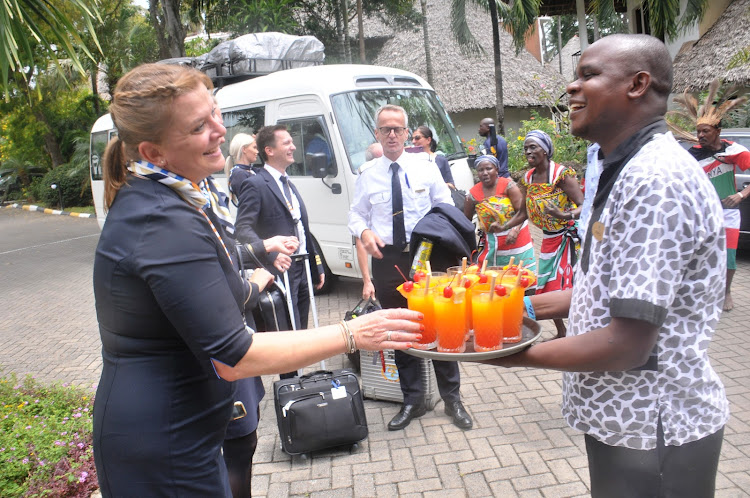 After a two-year hiatus, a Germany international charter airline, Condor on Saturday returned back to the coastal city of Mombasa.

Condor stopped flying to Kenya in March 2020 after the outbreak of Covid-19 in the country.

On Saturday, the flight made its maiden nine-hour trip from Frankfurt, Germany, through Zanzibar in Tanzania, before landing in Moi International Airport, Mombasa.

The plane had 88 tourists on board, after 122 others disembarked in Zanzibar.

Tourism stakeholders at the Kenyan Coast are optimistic that the return of Condor charter to Kenya will open up the region for more tourists from Europe.

Severin Sea Lodge General Manager Tuva Mwahunga, where some of the tourists spent their night, said historically Condor airline has been a “good boost for the tourism business in Mombasa.”

Since the Covid-19 outbreak in Kenya, the charter airline has not been able to plan its flight to the region.

“However, five months ago, they confirmed that Condor would be coming back, so we started preparing for their arrival. It was great news to welcome back Condor,” he said.

Mombasa is also receiving Eurowings Discover, a scheduled leisure airline within the Lufthansa Group, from Germany. It operates twice a week.

Mwahunga said with Condor and Eurowings, most tourists from Germany now have an option to either take a scheduled flight or charter flight.

“We are happy, not only for Mombasa, but the entire Safari circuit. Most of these tourists come to Mombasa and go for Safaris in various parks within Kenya,” he said.

Condor airline pilot Captain Alfred Kohler told journalists he is particularly happy to have flown back to Kenya after two years.

The whole of last year, Mombasa used to receive charter flights from Eastern European markets, however, after the outbreak of the Russia- Ukraine war in February this year, the flights stopped.

Mombasa used to receive charters from Romanian and Ukraine.