Why Kenyans are yet to reap from oil - audit

Kenya lacks tools to monitor costs incurred by explorers, have no competent personnel to help with reviews

•At the time of the audit, the state department had a shortfall of 155 staffers

•IOCs are likely to recover non-allowable costs owing to the lack of expertise. 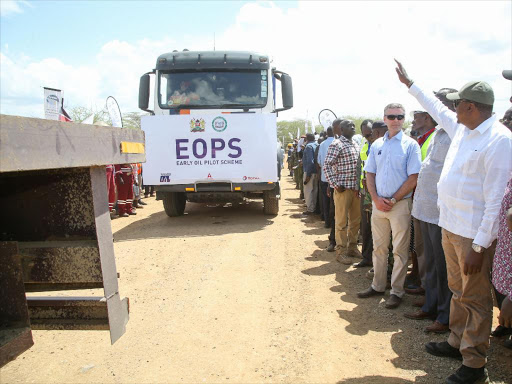 Kenyans may have lost billions of shillings in oil proceeds following the lack of a system to monitor the costs to be recovered from international oil companies.

A report released by Auditor General Nancy Gathungu has lifted the lid on why taxpayers are yet to reap from the mineral since it was hailed as commercially viable in 2012.

“The State Department of Petroleum was still not well prepared to monitor costs and operations in the petroleum sector,” Gathungu said in a Performance Audit of the Petroleum Department's preparedness to monitor oil earnings.

Recoverable costs, the auditor said, are crucial as they determine the amount of revenue the government would earn in profits once production begins.

Despite discovering commercially viable oil in Turkana in March 2012, Kenya is yet to reap the benefits to the full expectations.

An Early Pilot Scheme was initiated by President Uhuru Kenyatta in late 2017 where over 240,000 barrels of crude oil were exported, earning Kenya Sh1.48 billion.

Tullow Oil in a statement after closing the EOPS described the earning as “a major milestone in Kenya’s oil and gas industry.”

Gathungu’s report reveals that Tullow Oil did not submit their quarterly reports consistently.

Gathungu said that as a result, the ministry did not have real-time data to incorporate into its decision-making process, begging the question of whether taxpayers got a raw deal in the early eploits.

The audit further revealed that there were variances between the budgeted and actual expenditure, yet the Petroleum Department made no queries.

“There was neither communication from Tullow Oil to the department requesting for approval of modified budgets.”

The auditor says the department attributed the lack of reviews to a shortage of technical staff as well as a lack of standard procedures.

“Implementation of budgets that have not been reviewed may lead to IOCs incurring unnecessary expenditure that might eventually reduce the amount of revenue share to the government,” Gathungu said.

With the lack of staff, Gathungu said IOCs are likely to recover non-allowable costs that would have not been recovered if monitoring was carried out.

“Ultimately, this will reduce the amount of government share from revenues generated from the oil resources,” the auditor said.

In the same vein, it has since emerged that cost recovery statements were not detailed and were inconsistently submitted.

The Department did not have a checklist detailing the format in which the statements were to be submitted.

“Therefore, the statements were received and filed with no review and no feedback to Tullow Oil.” “The department could not identify the non-allowable costs or inconsistencies in a timely manner.”

Gathungu pointed out that owing to the lack of the breakdown of costs, the department will not have a reference point in the event of a dispute.

The auditor further reported that the government did not conduct audits of the books of accounts of the International Oil Companies as required by law.

“Failure to conduct timely audits denies the government an opportunity to remove disallowable costs and might lead to it not getting its rightful share of profit oil once production begins,” the report reads.

It has also emerged that no framework had been put in place at the time of the audit for the Kenya Revenue Authority to be involved in the cost recovery audits.

The report also showed that there was no evaluation carried out on operations of Tullow Oil, with further details showing there was no specific budget for monitoring costs.

“Lack of standard operating procedures and a specific budget line for monitoring activities resulted to minimal monitoring of IOC’s activities.”

“Consequently, the government might not be able to verify the authenticity of costs incurred by IOCs due to lack of real-time monitoring,” Gathungu said.

The auditor asked the department to develop standard operating procedures on how monitoring and evaluation should be carried out.

“This will ensure that the department has up-to-date information on the activities of the IOCs, for decision-making purposes and timely corrective action,” the auditor said.

NEMA admits even though a lot of strides have been made, many illegalities continue
News
4 months ago

Discussions are underway with potential bidders around a range of commercial arrangements.
Business
5 months ago

The firm had until end of June to complete a revised  assessment of the project.
Business
1 year ago
Post a comment
WATCH: The latest videos from the Star
by MOSES ODHIAMBO Journalist and Political Writer
Kenya
22 September 2022 - 04:00
Read The E-Paper