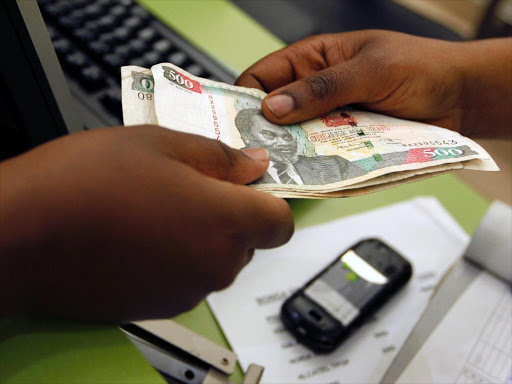 A customer conducts a mobile money transfer. Globally, an estimated 2.5 billion people don’t have a bank account, but many own a cellphone/REUTERS

RemX Holding Kenya Limited , Multigate Limited and OIT Africa Limited confirmed to the Star that they are now allowed to operate, saying thy hope to recover losses they incurred when their accounts were frozen in March.

''We are are now back to business. The Kenyan government did due deligence on our operations and gave us a clean bill of health,'' statement from the companies said.

The statement reveals that the companies had gone through a dark six months of investigations which saw them lose billions of shillings in revenue.

“During the six months of freeze, we lost financially, operationally and the great of all, reputation loss,'' the statement continued.

He revealed that the group of companies lost approximately $27 million globally due to the freeze and reputation slander. They were also forced to lay off staff following the protracted investigations.

“This was a huge blow.  Our global holdings companies were all affected. Our global banking partnerships were also affected,'' the statement continued.

Last week, Asset Recovery Authority (ARA) withdrew the suit against the companies and the court discharged the freeze orders exonerating the Directors of the fraud allegations.

ARA investigator handling the case Fredrick Musyoki in a sworn affidavit said the agency is satisfied with the explanation and evidence given by the entrepreneurs.

“The Agency is so far satisfied with the explanation and evidence tendered by the Respondents and wishes to withdraw the pending forfeiture application,” Musyoki said in the affidavit.

This saw the High Court lift a freeze order on the Sh5.6 billion associated with the two firms which have been operating in the country for the last two years.

A letter from the DCI dated August 29, 2022, seen by the Star said their investigations failed to link the companies to money laundering and card fraud.

“Please note that the investigations are now finalized. I would like, therefore to confirm that the allegations of money laundering and card fraud made against the above entities could not be established.”

RemX Capital Ltd is a liquidity refactoring company that provided multi-currency payable refactoring services to corporates that had payable obligations in currencies different from their primary currency of operation.

In March 2022, ARA obtained an order against the firms.

It had been alleged that the firms wired wired Sh25.6 billion between October and November 2020 with the blessings of a local politician.

Bank statements provided by a European investigator claimed a cross-continental operation that moved huge sums of dollars to Kenyan banks and wired them to multiple companies registered locally with shared ownership and suspect addresses.

Post a comment
WATCH: The latest videos from the Star
by LUKE AWICH Political Reporter
Kenya
20 September 2022 - 21:00
Read The E-Paper