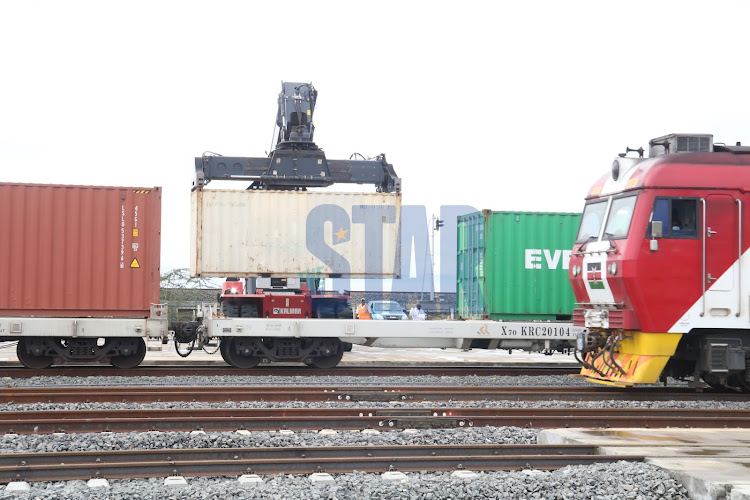 Containers being offloaded from the SGR to MGR at Naivasha ICD. PHOTO/WILFRED NYANGARESI

The Standard Gauge Railway's (SGR) best cargo movement in terms of volumes since its inception was recorded in July this year, the operators said yesterday.

According to latest data released by  by Kenya Railways Corporation (KRC) and the  SG operator Afristar, 543,944 tonnes of cargo were ferried in the said month.

This is a 50.5 per cent increase in cargo movement compared to the same period last year where 361,308 tonnes was ferried.

The second best performing month was February, when SGR moved 538,524 tonnes of cargo.

Kenya Railways attributed the  performance to the improvement in the SGR cargo off-take from the Port of Mombasa.

During the month, 267 trains from Mombasa moved 22, 394 import containers and 319,906 tonnes of conventional cargo of various products that include wheat, clinker, rice, sugar and steel to the Nairobi and Naivasha Inland Container Depots.

This is an improvement compared to the same period last year, when 175 trains moved 19,346 containers and 258,589 tonnes of conventional cargo.

Comparatively, 265 trains moved 2,133 containers of loaded containers, 14,299 containers of empty containers and 60,842 tonnes of cargo during the month back to the Port of Mombasa.

The two organisations further accredited the good performance to sustainability of operations for both local and transit markets.

“The month saw sustained ex hook deliveries, loading of containers direct from discharging vessels and quick coordination on connection up direction to both Inland Container Depots of Nairobi and Naivasha,” they said in a statement.

They said sustained performance has been achieved due to close working relationship by government agencies that include KRC, Kenya Ports Authority (KPA), Kenya Revenue Authority (KRA) and other cargo intervening agencies.

“Joint marketing both on local and transit markets has been sustained, with the recent visit by key stakeholders from DRC, both to Mombasa Port and the two Inland Container Depots with impressive interaction feedback,” KRC managing director Philip Mainga said.

Since its inception in January 2018, SGR’s freight services has had a growth from an average of a train a day to eight pairs of freight trains a day. The service has so far moved 20,439,003 tonnes of cargo.

Kenya yet to act on S. Sudan cargo demands

The country has reversed an earlier directive to have its goods collected in Nairobi.
Business
3 weeks ago