•Total arrivals for the eight months period were 924,812, up from 483, 246 international tourists who visited the country in the same period last year.

•The Jomo Kenyatta International Airport recorded the biggest arrivals at 681,811. 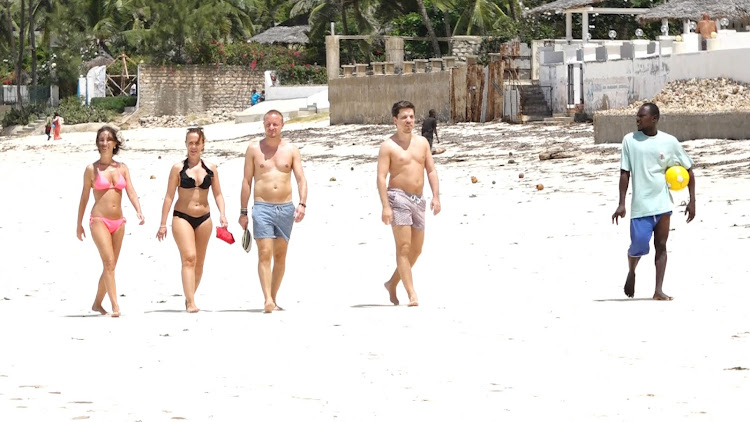 SECTOR WILL PROSPER: Tourists on holiday at a beach in Malindi/
Image: ALPHONCE GARI

Kenya has recorded a 91.3 per cent increase in the number of international tourists visiting the country in the year to August, official data released on Friday shows.

Total arrivals for the eight months period were 924,812, up from 483, 246 international tourists who visited the country in the same period last year.

This came with a jump in inbound tourism earnings which more than doubled to Sh167.1 billion compared to the Sh83.2 billion recorded in a similar period last year.

“The international market is opening up after a slowdown during Covid,” Tourism and Wildlife CS Najib Balala said on Friday.

He spoke during the official announcement of the tourism sector performance report at the Nairobi National Museum.

The Jomo Kenyatta International Airport recorded the biggest arrivals at 681,811 which was an increase compared to 355,781 visitors who came into the country in eight months last year.

Arrivals through the Moi International Airport (Mombasa) totaled 40,355 up from 26,843 even as the coast facility remained starved on direct-chartered planes from Europe, which have traditionally fed the region.

Arrivals through other points of entry, including cross-border, totaled 202,646.

July had the highest numbers on monthly arrivals, signaling the international market remained confident on Kenya despite the country having been heading into an election, which remained peaceful.

According to the data compiled by the Tourism Research Institute (TRI), led by CEO David Gitonga, holiday remained the main purpose of visiting Kenya by international tourists.

During the eight months, a total of 313,466 visitors were in the country for holiday followed those visiting family and friends whose total was 274, 722.

Meanwhile, 43,883 visitors transited through Kenya during the period under review with JKIA remaining a key regional aviation hub.

Visitors from the neighbouring countries were mostly in the country for business, according to the ministry.

“The year 2023 to 2024 will be for recovery,” Balala said, though pointed out that inflationary factors could impact on spending and travel decisions.

Kenya forecasts to have 1.9 million international tourists next year with the number expected to grow to 2.2 million in 2024.

The country’s best year currently remains 2019 when arrivals hit a high of 2.04 million visitors with earnings of Sh296.2 billion.

“Full recovery of arrivals to 2019 best year is expected in 2024. However, earnings could surpuss 2019 figures by 2023 indicating increased per capita earning from tourists,” TRI says in its report launched by Balala on Friday.

Kenya Tourism Board (KTB), the country’s lead marketing agency is keen to use the product to sale destination Kenya in these markets.

The board is also running a six-month campaign for the domestic market, which has remained a key pillar for the industry over the pandemic period, which had disrupted international travel.

Most of them are in Europe.
Business
1 year ago
WATCH: The biggest news in African Business
Post a comment
WATCH: The latest videos from the Star
by MARTIN MWITA Business Writer
Kenya
09 September 2022 - 14:30
Read The E-Paper