BRT is an expensive affair which we are still working on, the CS said.

•Macharia acknowledged that the Sh100 billion project has been on a go slow but will soon be fast-tracked.

•"BRT is an expensive affair which we are still working on.We have three lines which are in the process of implementing," the CS said. 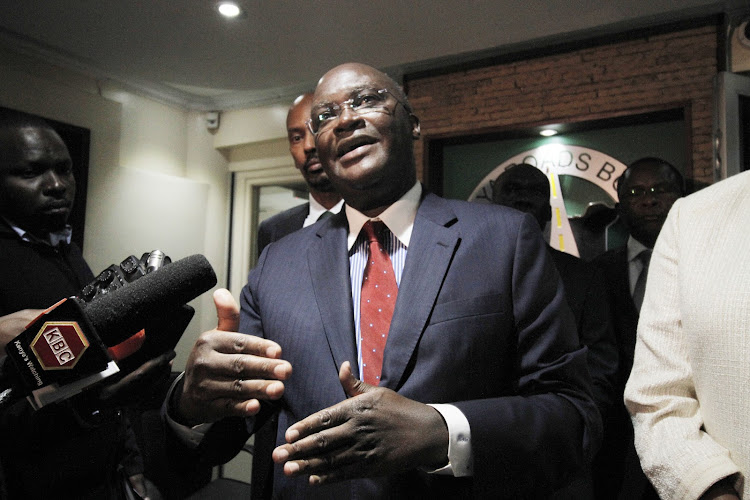 Transport Cabinet Secretary James Macharia has assured Kenyans that the dream of having a Bus Rapid Transit (BRT) system in Nairobi will be realised despite the delay.

Speaking to journalists on Thursday, Macharia acknowledged that the Sh100 billion project has dragged but will soon be fast-tracked.

"BRT is an expensive affair which we are still working on. We have three lines which we are in the process of implementing," the CS said.

Kenya has for long planned to roll out the transport system, has failed to attract potential investors.

BRT Line 1 will run from Limuru-Kangemi-CBD-Imara Daima-Athi River and Kitengela.

Line 4, called Kifaru, is comprised of East and West. The East one will run from Mama Lucy Hospital-Donholm (Jogoo Road)-CBD, while the West from CBD- T Mall-Bomas-Karen and Kikuyu.

Once complete, all the corridors are expected to hold up to 950 high capacity buses.

In February, the government assured Kenyans that it would roll out BRT by June but the plan was not realised.

World Bank in a recent report claimed poor institutional policies form part of reasons BRT system has failed to take off in Kenya.

National Treasury CS Ukur Yatani allocated Sh1.2 billion towards implementation of the project in the 2022-23 budget.

He said the transport system will reduce travel time and air pollution in the country's capital.

Last year, the government borrowed Sh6.4 billion from the Korean government to finance the project.

In February this year, the Nairobi Metropolitan Area Transport Authority  advertised for the supply of BRT buses for the first phase.

The buses sold or leased for three, seven and 12 years, will be considered based on propulsion technology that includes biodiesel, hybrid and electric.

Construction is set to begin in June 2023.
Counties
4 months ago

Bus Rapid Transit to be implemented as planned, says Namata

CEO Francis Gitau said the demarcation of the corridor should be ready by June.
Counties
1 year ago
Post a comment
WATCH: The latest videos from the Star
by SHARON MAOMBO Business Writer
Kenya
08 September 2022 - 18:00
Read The E-Paper