The 20% tax on fees charged on all digital loans was introduced in the Finance Act, 2022.

•Creditors through the Digital Financial Services Association of Kenya have termed  the  hike in tax as 'discriminatory'.

•The 20 per cent tax on fees charged on all digital loans was introduced following an amendment to the Excise Duty 2015 of the Finance Act. 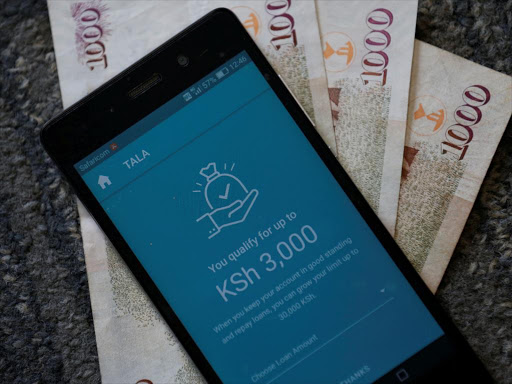 Tala app, an online financial micro lending platform is seen on a mobile phone in this photo illustration taken May 23, 2018.
Image: REUTERS/Thomas Mukoya/Illustration

Digital lenders want the court to declare the 20 per cent excise tax on loans advanced to online borrowers invalid.

Creditors through the Digital Financial Services Association of Kenya have termed  the hike in tax as 'discriminatory'.

The 20 per cent tax on fees charged on all digital loans was introduced after an amendment to the Excise Duty 2015 of the Finance Act.

Through lawyers Faith Macharia and Ikoha Muhindi, the association argues that the new tax means lenders will be exposed to double taxation contrary to the constitution.

"This court be pleased to declare that the impugned amendment of the finance act is unlawful, unconstitutional, null and void for failing to comply with national values of inclusiveness," the lawyers said in their petition.

The fintech lenders want the court to issue orders barring KRA from collecting or demanding payment of excise duty on fees charged on loans.

Under the new law, which came into operation on July 1, 2022 lenders are required to deduct the new tax based on “time of supply”, which shall be before the service is performed.

It was highly criticised especially by small businesses dependent on short-term loans to grow as this meant loans would be more expensive.

The tax will push up interest rates and other fees paid by borrowers for digital loans, including those that were not previously regulated by the Central Bank of Kenya (CBK).

A digital loan is a credit obtained via mobile banking such as M-Shwari and KCB-Mpesa or a smartphone app.

The law excludes airtime advances and other forms of digital borrowing such as Safaricom’s overdraft facility Fuliza.

“The proposed change affected all digital loans from 1st of July as we are required to effect excise tax which is a percentage of fees levied on borrowers for services rendered by the lenders,” said DLAK chairman Kevin Mutiso.

According to the State of Digital Lending in Kenya Report 2021, by consumer intelligence firm Reelanalytics, the majority of Kenyans place digital lending platforms top on their priority list of credible sources to fund the growth of small businesses.

According to the survey, for every 100 Kenyans interviewed, 55 took a digital loan in 2021, a clear case for the existence of this service and the exponential growth in the number of businesses and Apps offering loans.

This is driven by growing access to mobile phones, which grew to reach 59.2 million connections or a 109 per cent penetration rate.

According to the law, all licensed digital lenders will no longer be subjected to thin cap rules, as they would be deemed as financial institutions.

There was surge in demand for credit by the various economic sectors in 2021.
Business
1 month ago

Charges on digital loans to rise on new excise tax

For every 100 Kenyans interviewed, 55 took a digital loan in 2021
Business
2 months ago
Post a comment
WATCH: The latest videos from the Star
by SHARON MAOMBO Business Writer
Kenya
30 August 2022 - 04:00
Read The E-Paper