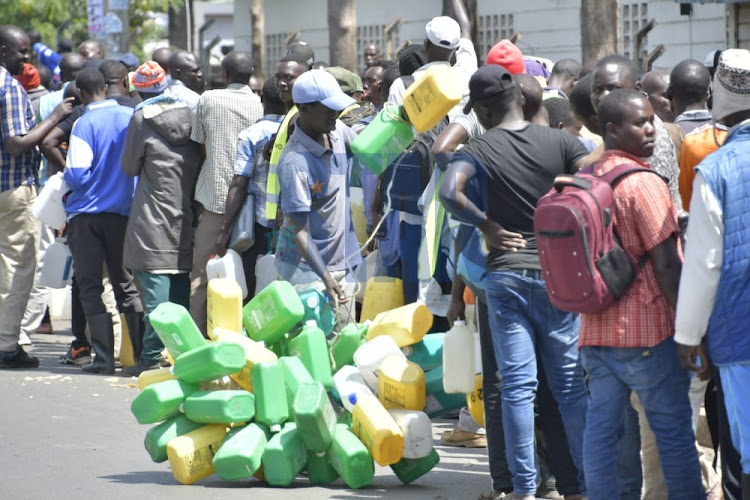 Kenya could go back to the fuel shortage last witnessed in May if the government does not clear the rising debt owed to suppliers.

A top official of one of the major oil suppliers in the country told the Star in confidence that they are considering holding stock pending clearance of almost Sh11 billion they are seeking from the government.

"The business is not making sense anymore. Arrears arising from the subsidy plan are unsustainable. We are forced to borrow to sustain operations,'' he said.

He added that arrears have been accumulating since June and efforts to follow up on payments were complicated by the just concluded general elections.

"We fear that the transition following the election of the new government will worsen the situation to our disadvantage,'' he added.

On Friday, the Petroleum Outlets Association of Kenya (POAK), a body that brings together all operators in the sector hinted at supply disruption, indicating that suppliers have run out of funds.

"The Petroleum Industry is owed more today than ever. A bill of Sh65 billion. This is a sizable percentage of the industry's market cap. Large enough to cause supply disruption,''POAK said in a tweet.

The lobby added that suppliers are in extreme dilemma fuelled by government transition, product availability and cost.

Both the National Treasury, the Ministry of Energy and the Energy and Petroleum Regulatory Authority (EPRA) did not respond to our inquiries about the status of the subsidy plan and repayments to suppliers.

The government and fuel suppliers have been in a hot and cold relationship since the introduction of the fuel subsidy plan, leading to a countrywide shortage in April.

Delays in the payment of subsidies to the companies by the government pushed up prices in the wholesale market where oil majors resold fuel to the smaller independent fuel retailers, who control 40 per cent of the market.

This saw the small retailers hesitate to buy the costly fuel, with the increased supply of oil majors unable to plug the deficit.

The oil majors are also cautious to increase supply, uncertain about whether the state would compensate them for fuel not used to calculate the monthly price adjustments.

Both the government and international bodies like the International Monetary Fund (IMF) have questioned the sustainability of the oil subsidy.

Last month, the lender set fresh loan conditions requiring Kenya to drop the fuel subsidy programme by October, terming it as a burden to the fiscal plan.

The multilateral lender inserted the removal of the subsidy under the 38-month budget support scheme, in the list of reforms attached to a $2.34 billion (Sh279 billion) loan package.

The lender said Kenya has since April last year spent an average of Sh7.65 billion monthly to subsidize diesel, super and kerosene, highlighting the adverse impact of the fuel stabilisation programme on the country’s revenues.

This saw the government slash the subsidy by 84 percent or by Sh26.7 billion for the year which started on July 1.

Even so, the government has retained fuel prices for the past two months in a row as it continues to utilise the Petroleum Development Levy (PDL) to cushion consumers.

Although the fuel subsidy has been a blessing to consumers, it turned into a bitter pill in April, escalating fuel shortage in the country that saw a litre of petrol retail for as high as Sh300.

Global fuel prices have been rising in the past month following a supply chain disruption caused by Russia's invasion of Ukraine, hitting a high of $118 per barrel in March.

The global supply chain disruption brought about by Covid-19 saw fuel prices rise, with the spiral effect spilling to other sectors, pushing up the cost of living.

To cushion families, the government raised the petrol levy to Sh5.40 from Sh0.40 in July 2020 and committed to adding about Sh2 billion every month to the kitty to cushion consumers from price hikes.

While the collection of the funds, estimated at Sh5 billion per month starting in 2020, stabilization of pump prices began from the April-May 2021 pricing cycle.

The National Treasury is in charge of the collection of the fund and is the ideal entity to avail data on the amounts collected.

Fuel prices to remain unchanged despite increase in landed cost

The next President will need to eliminate financial subsidies before undertaking expensive policy pledges.
Opinion
1 month ago

EPRA is expected to review retail pump prices on Thursday.
Business
2 months ago

Higher fuel prices cannot be avoided but government can introduce measures to reduce fuel consumption - such as increasing the percentage of green ...
Opinion
10 months ago

State to make Sh18.6bn in taxes from fuel this months

This, as industry players call for a revision of pricing module.
Business
1 year ago
Post a comment
WATCH: The latest videos from the Star
by VICTOR AMADALA Business Writer
Kenya
20 August 2022 - 04:00
Read The E-Paper