Network coverage at 96.3% ahead of elections - CA 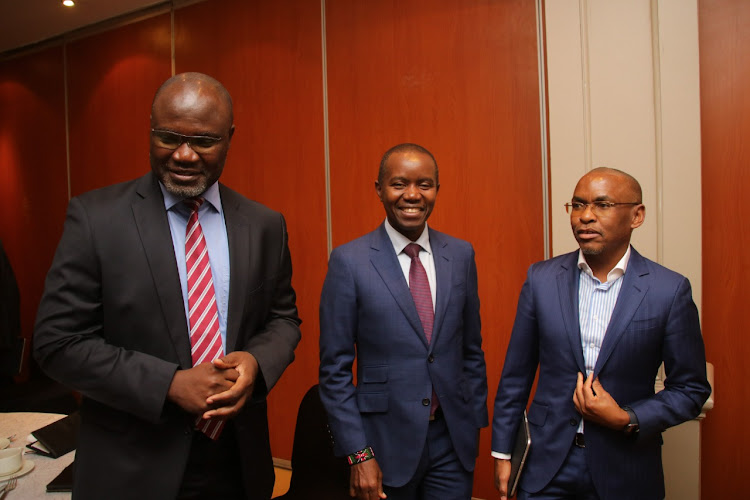 Churchil Otieno, President Kenya Editors Guild(KEG), ICT CS, Joe Mucheru and Peter Ndegwa, Safaricom CEO during a breakfast meeting in Nairobi that sought to establish the role of mobile network operators, their preparedness and areas of collaboration in the August 9 Election./HANDOUT

Kenya's mobile network coverage is at 96.3 per cent compared to 78 per cent in the last election, the Communications Authority said yesterday.

This, the authority's project planning manager Paul Kiage assured will provide a seamless transmission of results of the August 9.

He was speaking at a Kenya Editors' Guild breakfast meeting on the role of the ICT sector in elections.

“In the last election 3G network was at 78 per cent, this year 4G/3G is at 96.3 per cent so the gap is 3.7 per cent in 1111 polling stations. So in those polling stations we recommend use of satellite,” Kiage said.

Kiage said through the Universal Service Fund, they have managed to roll out  ICT infrastructure in various parts of the country.

Last year, Safaricom reported that 3G and 2G population coverage now stand at 96 per cent and 97 per cent respectively with the aim of reaching 100 per cent coverage with 4G.

It said 4G-capable phones accessing the Safaricom network grew 37.3 per cent to 9.7 million. while 4G phones that use more than 1 GB of data grew 22.2 per cent to 4.7 million, which represents 48 per cent of all 4G devices.

Safaricom has also worked with the Communications Authority of Kenya to allocate more 3G spectrum to manage the stress of the network caused by the spike in demand for data during last year’s lockdown.

Speaking at yesterday's meeting, Safaricom CEO  Peter Ndegwa said that they remain neutral in the elections and their main role is to ensure seamless transmission of data.

“We will provide the right service and we assure you no one will interfere with the content that will be transmitted to IEBC. We will do anything possible to support the process and if there are questions we will answer them in real time,” he added.

ICT cabinet secretary Joe Mucheru said that they will not shut down the internet.

“About Facebook shutdown, we are committed to the freedom of press. We are not going to or planning to shut down any media but if there is a national security threat that is a different thing," Mucheru said.

The license cost sh. 4.7 billion, and is valid for the next 15 years from July this year.
Sasa
3 weeks ago

IEBC scrutinised over ability to relay results from no-network stations with 398,483 voters.
News
3 weeks ago

There will be optimum network coverage during polls — IEBC