•Banking industry was assessed as the sector with the highest impact on the national money laundering vulnerability.

•This is largely due to the important role played by commercial banks in the economy. 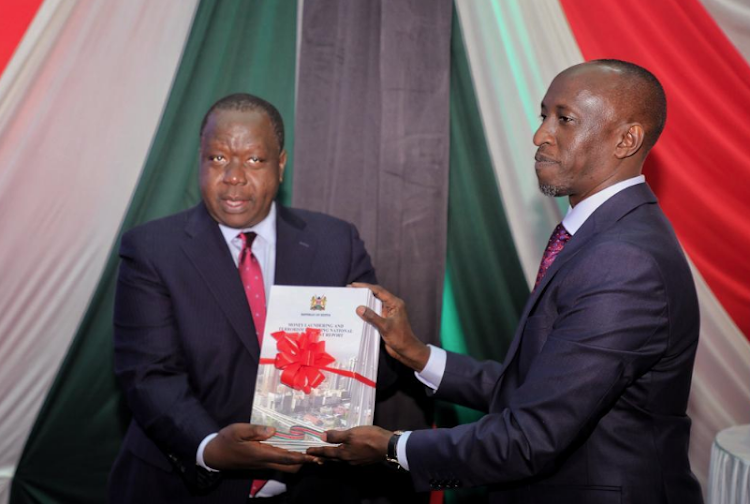 The risks for money laundering are high for betting firms owners, a government report now says, even as Kenya remains vulnerable to illicit financial flows.

The Money Laundering and Terrorism Financing National Risk Assessment Report (NRA)notes the high risk is as a result of the ownership of sports betting firms, which is predominantly foreign-based with locals playing a minority role.

Money laundering risk is also noted where proceeds from sports betting could be comingled with funds from predicate crimes and passed out as genuine winnings with a possible collusion on who takes the winnings, which are later either reverted into the syndicate or transferred outside the country.

The potential for money laundering risks in sports betting was assessed as low for betting individuals.

“This is attributed not only to the threats facing these sectors in general, but also to the fact that these sectors have relatively weaker frameworks on ML/TF/PF (Anti-Money Laundering, Counter-Terrorist Financing and Counter-Proliferation Financing) oversight,” the report reads in part.

The overall money laundering threat for the country was however assessed as medium with a potential for increase in the future.

On the other hand, the national money laundering vulnerability was assessed as medium high.

Banking industry was assessed as the sector with the highest impact on the national money laundering vulnerability, largely due to the important role played by commercial banks in the economy.

The assessment found the legal sector highly vulnerable for money laundering abuse largely due to the role played by lawyers in relation to their client’s transactions.

In this regard, the NRA report recommends that AML/CFT requirements should be applied on lawyers and motor vehicle dealers.

Kenya is particularly vulnerable to all forms of illicit financial flows because of the ingenuity of its citizens, the status of the country as a regional trade hub and the fact that it has a relatively sophisticated financial system and a favourable environment for technological innovations.

The NRA Report has assisted the country in identifying the gaps and deficiencies in Kenya’s legal, regulatory and institutional framework for Anti-Money Laundering, Combating the Financing of Terrorism and Combating Proliferation Financing (AML/CFT/CPF).

The NRA has also enabled the country to prepare for the ongoing second round of mutual evaluation that majorly focuses on the understanding of ML/TF risks as well as the application of risk-based measures.

The common methods of laundering money in Kenya were assessed to entail opening ‘suspicious’ bank accounts and making periodic cash deposits which do not correspond to the suspect’s known sources of income.

In a number of related incidences, there are no withdrawals from the bank accounts despite receiving huge sums of money which obviates a presumption of innocence.

The other methodology used involved procurement corruption where officials are influenced and, or enticed into flouting the rules and inflating the prices of goods and services being procured.

The assessment showed that fraud and forgery, corruption, drug trafficking, environmental crimes and tax evasion are the predominant predicate offences to money laundering in the country.

Individuals involved acquire massive wealth by laundering the proceeds of crime through proxies who conceal and disguise the source of funds used to procure the assets involved.

To avoid detection, deposits are made in tranches below the reporting threshold to evade the attention of the authorities and guidelines placed by regulators, which require that an account holder declares the source of such money.

The other major proceeds generating predicate offences include homicide, offenses against morality, offenses against persons (such as assault, affray and creating disturbances), robbery, breakings, theft of stock, stealing, theft by servant, vehicle and other theft and other penal offenses.

“The NRA Report will facilitate the development of a national framework for implementing countermeasures against the financing of these deadly disruptions to Kenyan lives and livelihoods, Interior CS Fred Matiangi said.

CBK conducted a demonetisation exercise in 2019, of the old generation Sh1, 000 note, to address the grave concerns of illicit financial flows and counterfeits.

“CBK is committed to continue working with the sector and other players in implementing the actions indicated in the strategy and action plan to strengthen the banking sector AML/CFT supervisory and regulatory framework,” governor Patrick Njoroge said.

Judge directs that the monies be deposited to an account number in the name of Assets Recovery Agency
News
2 months ago
WATCH: The biggest news in African Business
by MARTIN MWITA Business Writer
Kenya
01 August 2022 - 04:00
Read The E-Paper