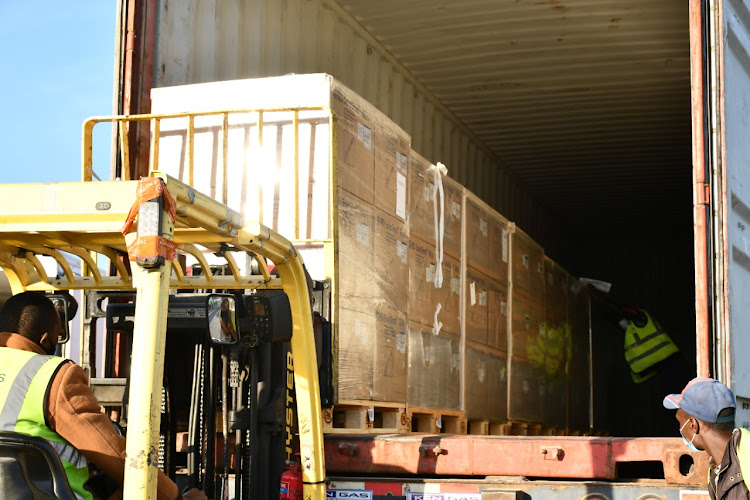 The final batch of specialised Pfizer syringes arrive at JKIA aboard Emirates flight on October 3.

The weakening shilling hurt supplies by Kenyan firms to the United Nations, with trade dropping 11.3 per cent.

Importers have to source dollars to purchase their goods but are mostly paid in the local caries upon supplying.

According to 2021 Annual Statistical Report on United Nations Procurement, the value of local traders supplying to the UN last year dropped to $529.5 million (Sh62.8 billion).

The drop in the value of trade is despite the growth in the number of suppliers listed in the United Nations Global Marketplace (UNGM).

Among the developing countries, Kenya was ranked ninth with a value of $4.4 billion (Sh522.1 billion).

Transportation, storage and mail services maintained the leading most procured category in the country since 2013.

In the year under review, local suppliers in those sectors earned $16.1 million (Sh189 million) from the UN agencies largely on Covid-19-related materials dominated by vaccines.

The shilling has been on a losing streak against the greenback since last year, shedding five per cent of its value year on year.

On Wednesday, the local currency dropped to a new low of 118.71 against the greenback which has since strengthened to trade at par with the Euro.

Last month, the Kenya Association of Manufacturers (KAM) protested the dollar shortage in the country, saying it was impeding members' import capacity.

According to the manufacturer's lobby, the situation has forced some of its members to close shop while others forced into the black market where they are buying a dollar at a high of Sh122.

However, the Central Bank of Kenya (CBK) dismissed the claims, saying about $2 billion a month, which is enough to meet all demand in the economy.

“If you have a sector that is importing $90 million or $100 million, that is nowhere near the $2 billion that we are putting out,” Njoroge said.

Although the report did not mention reasons for the drop in 2020 figures, the supply glitch is likely to have been a result of the Covid-19 menace that saw governments imposing tough prevention measures.

A weak shilling has an implication on supplies, meaning traders had to spend more to bring in commodities such as cars, foodstuff, industrial material, and apparel, as the country is an import-dependent economy.

According to the report, the ongoing supply glitch brought about by Covid-19 and the ongoing Ukraine-Russia crisis will continue hurting supply.

USA remained the top ranked supplier with more than 22,000 suppliers registered under UNMG with 41 UN organisations procuring from the country.

GlaxoSmithKline Biologicals SA, a Belgium-based company topped the list with a sales portfolio valued at $2.5 billion ( Sh296.5 billion) followed by Pfizer Inc from the US.

The USA was ranked at position one followed by India and United Arab Emirates UAE in the third position.

''This is in line with the 2030 agenda for Sustainable Development and also to stimulate capacity growth, economic activity and employment where the goods and services are created,'' the report said.

Food prices have increased to a 14-year high with oil prices highest since 2008.
Business
4 months ago