The airline still targets to hit 917,000 passengers by close of this year. 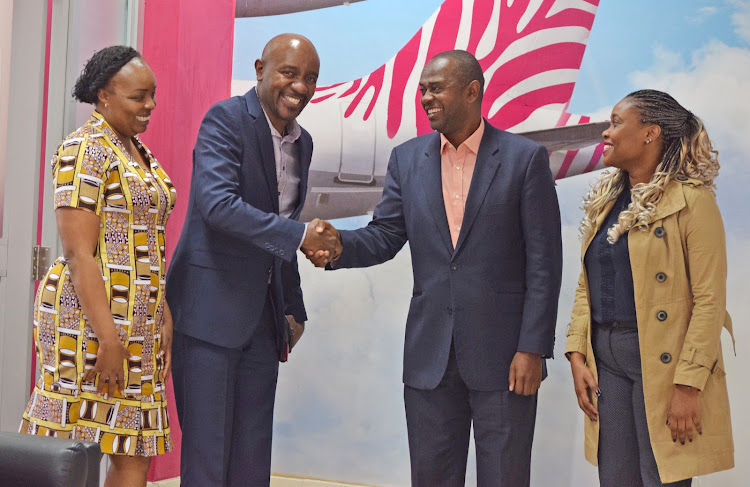 Budget airline Jambojet increased passengers by 390,000 last year as the industry recovered from the Covid-19 pandemic.

Speaking to the star, Jambojet’s CEO Karanja Ndegwa accredited the increase in numbers to the adoption of automation and capacity building in their operations enhancing customer satisfaction.

“We have done our best to make flight costs affordable to the passengers and we keep on making efforts to promote an increased number of flights as the more you fly, the more the cost of flight goes down attracting more passengers,” Ndegwa said.

The airline also attributed the growth to the loyalty programme launched in April.

Even so, the management said the recovery is being slowed by the ongoing global supply chain glitch following Russia's invasion of Ukraine, pushing up flight costs by eight per cent since January.

Jambojet, a market leader with over 44 per cent domestic market share, has flown 4.9 million passengers since its inception in 2014.

The airline operates flights on 11 routes: From Nairobi to Mombasa, Malindi, Kisumu, Ukunda (Diani), Lamu, and Goma in Eastern DRC.

It also flies from Mombasa to Lamu, Eldoret, and Kisumu.

This year, the airline is targeting 917,000 passengers, hoping to surpass the one million mark the following year.

In April, Transport principal secretary Joseph Njoroge noted that the country’s aviation sector operations were back to a 94 per cent performance after the disruption caused by Covid-19.

To further its operations and contribution to the economy’s growth, the airline is now in pursuit of growing the newly launched Lamu and Goma routes.

This is after the airline launched the DRC route in its expansion bid.

The sector is gathering steam after last year's outlook by the International Air Transport Association (IATA) revealed a significant fall in revenues.

According to the report, locally, it was estimated that 223,600 jobs were at risk with a GDP loss of up to $1.8 billion.

On Friday, the airline announced Sh26.6 billion capital injection from the government
Business
6 months ago

US to drop test requirement for air travellers

The change comes into effect on Sunday.
News
2 months ago