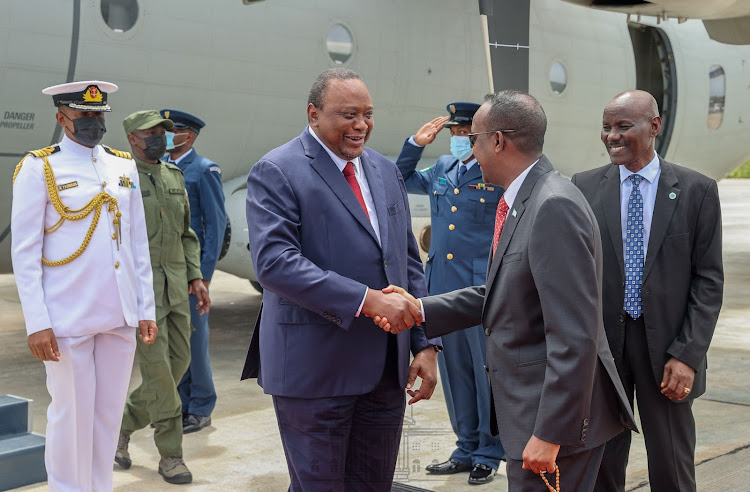 Somalia could be considering joining the East Africa Community (EAC), days after DRC Congo was admitted to the regional trade bloc.

The leader had initiated the bid during his first term between 2012 and 2017 together with DRC  but members declined due to war and disorder in the horn of Africa nation.

EAC secretary general Peter Mathuki told the media that the President of Somalia is in attendance as a guest, declining to divulge more information.

Mohamud, who won the presidential polls in May was received by Tanzania's Trade and Investment  Minister Ashatu Kijaji and flatly declared his purpose.

''I am here to make a formal bid for Somalia to join the East African Community,'' Mohamud said.

A geopolitical expert Rashid Abdi and a close ally to the new president tweeted that Kenya, Uganda and Tanzania are favourable to the idea.

''If allowed, the accession process will take a minimum of two years,'' Abdi said.

The inclusion of Somalia in the regional trading bloc will make EAC a plus 100 million population market after the addition of DRC pushed it to 92 million.

The 2020 consensus report puts the horn of Africa country's population at 16 million.

It is also likely to push the region's combined GDP above Sh30 trillion, from the current Sh29 trillion after the addition of DRC.

The countries become members of the bloc when they meet certain conditions set out in the 1999 Treaty for the Establishment of the East African Community.

They include respect for universal principles of good governance, democracy, the rule of law, respect for human rights and other civil liberties.

At the summit which officially opens today, regional leaders are expected to take stock of the progress of implementation of the EAC Common market protocol and adopt strategic measures to unlock the lags and bottlenecks in the establishment of the common market.

Burundi's President  Évariste Ndayishimiye will take over the chairmanship of the bloc from Kenya's Uhuru Kenyatta.

•DRC’s Vice Prime Minister and Minister of Foreign Affairs, Christophe Lutundula Apala Pen’ Apala, said that the entry of his country into the EAC ...
Business
1 month ago

AFCTA representatives have agreed on only 87 per cent of rules of origin for all products covered by the trade area.
Business
2 months ago

DRC has a population of 95 million people, signifying its vital importance in the bloc.
Opinion
4 months ago
by VICTOR AMADALA Business Writer
Kenya
21 July 2022 - 18:00
Read The E-Paper