Why Al-Shabaab are no longer a threat to LAPSSET Corridor

National government has been fighting the extremist group since 2015. 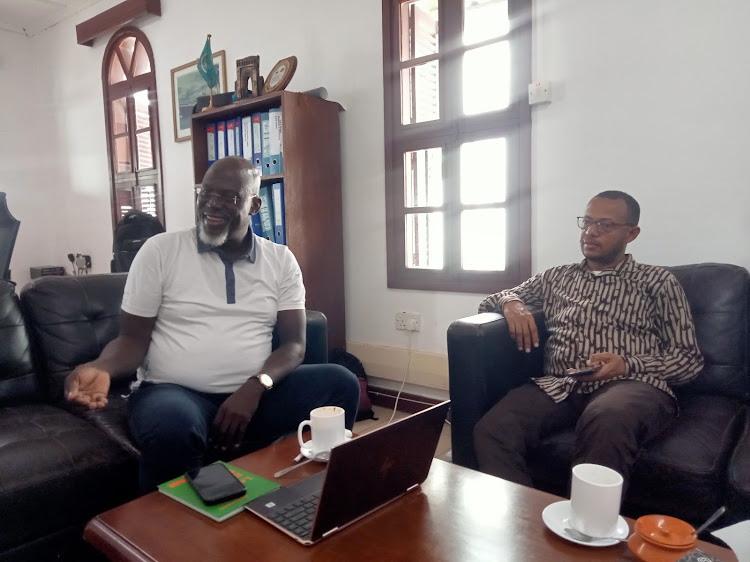 Insecurity caused by Al-Shabaab in Lamu is no longer a threat to the implementation of the Sh2.5 trillion LAPSSET project, officials have said.

Despite a series of Al-Shabaab attacks early this year targeting Lapsset-related projects in the region, which saw some of them halted, its implementation still continues.

According to port officials, improved security in Lamu and along the Northern Kenya corridor has greatly contributed to the successful performance of the Lamu Port, and all the other projects along the Lapsset Corridor.

The project has faced challenges that include financing and lack of political goodwill.

However, the Kenyan government has built the first three berths at Lamu Port and improved the road network.

Speaking on Sunday, Lamu Port General Manager Vincent Sidai acknowledged the endless efforts being made by the national government since 2015, in the fight against Al-Shabaab.

This is in the Boni forest and areas towards and along the Kenya-Somalia border.

It has contributed to peace and stability, he said.

The government in 2015 launched a multi-agency security operation which to flush out Shabaab militants believed to be holed up inside the Boni forest.

The operation is still underway and is credited for the tremendous improved security across Lamu.

Since the port was commissioned by President Uhuru Kenyatta , on May 20 last year, it has continued to perform well with at least 11 ships docking.

More ships are expected to dock at the new Port before the end of the year.

Currently, all the three berths are operational.

They were built at a cost of Sh49 billion.

“All these achievements were possible because of the improved security ,”said Sidai.

He however proposed for the establishment of numerous stopovers along the Lapsset corridor, saying it will help improve security.

“There are LAPSSET road projects such us the Lamu-Ijara-Garissa route that cuts across Boni forest. My proposal is that as these projects are implemented, let them consider establishing stopovers,said Sidai.

They can include refreshment centers, petrol stations, shops, restaurants, and other business, he said.

He said the move will also open up the region for business.

The Lapsset Regional Manager in charge of Coast, Salim Bunu,said  various marketing strategies have been put in place to help secure  investments for the Lapsset Corridor.

Bunu said he was looking forward to 24-hour operations along the Lapsset Corridor projects once all the ongoing works are completed.

“Apart from the government having fought and reduced Al-Shabaab attacks, I believe once all the Lapsset Corridor projects, including the roads, are fully operational, we will attain 24-hour operations," said Banu.

The Lapsset Project was in June 2015 endorsed as a Presidential Infrastructure Champion Initiative Project during the AU-Heads of State and Government Orientation Committee meeting in Johannesburg, South Africa.

Lapsset incorporates a 32-berths seaport at Lamu, construction of an oil refinery, three airports including the expansion of Manda airstrip in Lamu and construction of resort cities in Lamu, Isiolo and Lake Turkana shores.

In January 2020, the three partner states in the Lapsset project—Kenya, Ethiopia and South Sudan signed an agreement to fast-track its implementation.

“Lamu Port is a regional project,” CS Macharia affirmed during the signing.

The conflict in Ethiopia has not affected the Lamu Port-Southern Sudan-Ethiopia Transport Corridor (Lapsset), the Kenyan government says.

Instead, it has created an opportunity for Kenya to offer Ethiopia an alternative import route in instances of disruption on its main trade corridor with neighbouring countries.

This is mainly Djibouti through which up to 90 per cent of its international trade (goods) pass through.

Lapsset creates the second major transport and transit corridor in the country, after the Northern Corridor, which is a multi-modal trade route linking the landlocked countries of the Great Lakes Region with the Port of Mombasa.

Currently, most imports and exports are through the Port of Mombasa which also serves the region through the Northern Corrodor.

Lamu Port is being marketed as a transhipment facility.

Transshipment is the movement of goods or containers to an intermediate destination, then to another destination, with among reasons being to change the means of transport during the journey, known as transloading.

This mainly involves offloading of cargo from larger vessels, which cannot call at small ports, which are then loaded to feeder vessels for shipment to final destinations, and vise versa.

Lamu Port has a bigger vessel handling capacity than Mombasa.

Its berths are 400 metres long compared to Mombasa’s 300 meters average while the depth at Lamu is up to minus 17.5 meters against 15 meters at the Port of Mombasa.

Lamu can handle Post-Panamax ships. This are vessels that cannot pass the Panama Canal, with the word Post-Panamax being used to decribe world's biggest vessels. 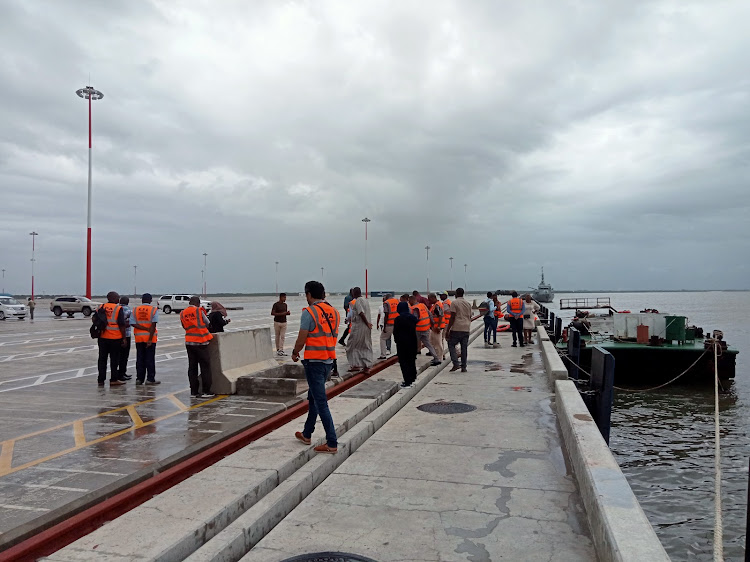 Officials and delegates on a tour of the Lamu port.
Image: CHETI PRAXIDES
by CHETI PRAXIDES Correspondent,Coast Region.
Kenya
18 July 2022 - 04:00