•The region is split on preferential Rules of Origin and tariffs on textile and apparel, sugar and sugar products, goods produced in Special Economic Zones (SEZs).

•The other sector is automotive as trade experts call for a harmonized deal. 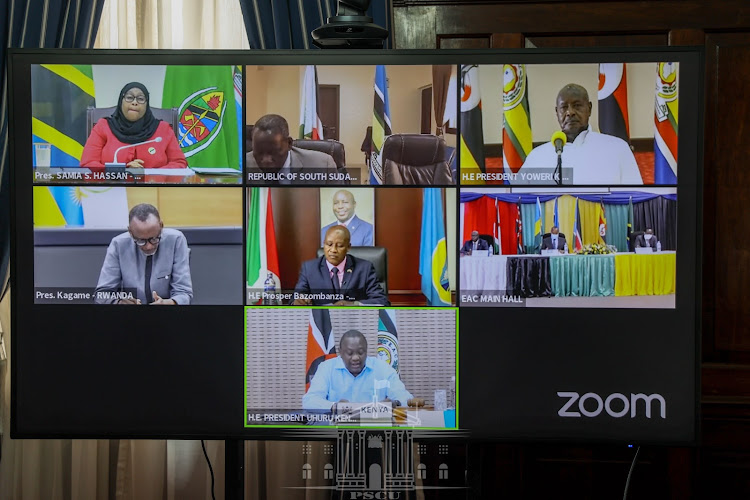 EAC heads of State during a past virtual meeting/FILE
Image: PSCU

Protectionism is playing out among the East African Community (EAC) member states that could expose the region to unfair trade practices under the African trade pact, latest developments indicate.

The region is split on preferential Rules of Origin and tariffs on textile and apparel, sugar and sugar products, goods produced in Special Economic Zones (SEZs) and automotive sector, fresh details show, with trade experts calling for a harmonised deal.

For instance in the sugar sub-sector, the AfCFTA (African Continental Free Trade Area)  secretariat has proposed a value-added standard–manufacture in which the value of non-originating materials does not exceed 60 per cent of the ex-works price of the product, subject to a mandatory review after five years.

This has failed to generate the requisite level of consensus among member states, a report by the East African Business Council (EABC) indicates.

EAC Partner States are divided in their preferences where Kenya, Burundi and the DRC are in support of the Secretariat’s position.

Rwanda is undertaking internal consultations with a view to joining them.

Tanzania and South Sudan are split on the review terms as they seek to allow more imports.

Local content requirement is currently at 40 per cent, which is considered too steep for sustainable production.

On SEZs, the draft ministerial regulation states that goods produced in these zones shall be treated as originating goods provided that they satisfy the rules of origin.

Member states are however yet to agree on  import duties being paid on the inputs of these products.

The EAC private sector attributes the divergence between the EAC partner states as due to the lack of a regional policy on goods produced in SEZs.

It makes economic sense to treat such goods as originating, provided they satisfy the AfCFTA rules of origin, the private sector says.

“This is due to the fact that goods produced in SEZs are already circulating freely in COMESA and SADC, and that the same will apply to the Tripartite Free Trade Area once the agreement establishes the TFTA enters into force,” EABC secretariat says in its report.

Regional states have also differed on imports of raw material for the local textile and apparel industries, as they seek to curb cheap imports.

This, even as the enjoy a huge export markets under agreements such as AGOA.

There are at least 44 elements on textile that are yet to be agreed touching on among others, natural fibres, man-made staple fibres chemical materials and textile pulp.

The fact that Rules of Origin alone will not solve all the historic challenges facing the textile and apparel sector, a deliberate industrialisation strategy that puts in place the right policy mix and environment to support the development of a vertically integrated value chain is needed, experts at EABC say.

This should include affordable credit, affordable energy, updated technology, a highly skilled and productive workforce, and a favorable regulatory and policy environment.

It proposes for the provision of preferential market access for African textiles and garments in the uniformed market including police, military, schools, hospitals among others.

“ Stringent rules of origin will lock out trade in textiles and apparel in the continent against the objectives of AfCFTA,” EABC, led by chief executive John Bosco Kalisa, notes.

On the automotive industry, a Council of Ministers meeting held in January narrowed down to two options, with the possibility of a middle ground, to the outstanding rules of origin.

The first one was the adoption of a higher Value of Non-Originating Material  (70%) to enable new industries in the auto sector to grow.

The other one is  to have it at 60 per cent to ensure that at least 40 per cent African content is added to vehicles that qualify for tariff preferences, in order to create jobs and grow industrial output on the continent.

The rules of origin for this sector are intended to help limit importation of used second-hand vehicles imported from outside the continent.

The regional states currently have different age limits with Kenya at eight years, Uganda (15 years) while Tanzania has it at 10 years, but older units have been entering at an extra tax.

Rwanda, Burundi and South Sudan have had no limits for years, despite recent efforts to put a cap.

EAC member states have since been urged to harmonise their different tariff rules and negotiate at the AfCFTA as a pact.

“Given the fact that the EAC Partner States as customs union had submitted a joint EAC Tariff offer under AfCFTA,it is important for the region to negotiate with a harmonised position that will grant preferential tariff treatment on goods that will be imported into EAC markets,” Kalisa said.

As of May 2022, 87 per cent of the AfCFTA rules of origin provisions had been agreed upon.

Women workers could see the biggest gains.
Business
1 month ago

AFCTA representatives have agreed on only 87 per cent of rules of origin for all products covered by the trade area.
Business
1 month ago
WATCH: The biggest news in African Business
by MARTIN MWITA Business Writer
Kenya
11 July 2022 - 04:00