International LPG prices have jumped by more than 60% since December 2019, pushing up LPG prices by 40‐60%

•Cooking gas prices have been rising fast with the cost of refilling a 13-kilogramme cylinder currently at  Sh3,500, from Sh2,978 in January.

•The pandemic  dealt a blow to African countries looking to join the oil producers club, including Kenya, Ghana, Senegal and Uganda. 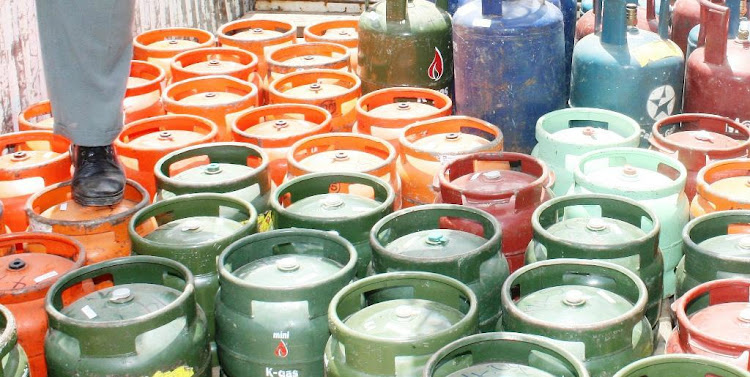 Families in Kenya are spending more than 10 per cent of their total income on cooking gas as global prices soar.

This is the highest in the continent followed by Nigeria at seven per cent according to Africa Energy Outlook 2022.

Cooking gas prices have been rising fast with the cost of refilling a 13-kilogramme cylinder currently at  Sh3,500, from Sh2,978 in January.

According to the Energy Outlook report higher LPG prices, in particular, are restraining efforts to expand the use of clean cooking fuels.

International LPG prices have jumped by more than 60 per cent since December 2019, pushing up LPG prices by 40‐60 per cent.

This has caused many families to revert to polluting cooking fuels such as charcoal with serious consequences for human health and deforestation.

However, this may not be achievable anytime soon as the pandemic dealt a blow to African countries looking to join the oil producers club, including Kenya, Ghana, Senegal and Uganda.

By more African countries joining oil production, the rate at which the region imports oil would have reduced thereby stabilizing prices for the consumers.

While Uganda recently reached a final investment decision on the $10 billion Lake Albert development project, the timeline for other new projects in these countries remains uncertain due to persistent delays, technical problems and weak regulation.

As a result, oil production in sub‐Saharan Africa is projected to contract by one‐quarter between 2021 and 2030 as shrinking global oil demand weakens the investment climate for new field developments.

In sub‐Saharan Africa (including South Africa), the projected decline in oil production contrasts starkly with the growing demand for oil products.

According to the report, the region’s net oil exports fell by 40 per cent in the 2010s to 2.4 mb/d in 2020 on the back of dwindling production and surging demand.

This trend is projected to continue, with the region becoming a net importer of oil in the mid‐2030s.

According to the report, Liquefied petroleum gas (LPG) is the leading solution in urban areas, but recent price spikes are making it unaffordable for 30 million people across Africa, pushing many to revert to the traditional use of biomass.

The jump in LPG prices coincided with moves to remove subsidies in some countries in the face of pressure from multilateral lenders.

To manage the situation, Kenya seeks to dominate the supply of LPG by constructing the biggest import and storage gas facility in Mombasa.

It will also license more private companies to compete with Tanzania which has dominated the business for years in the region.

Tanzania recently entered the Kenyan market with its Taifa gas, a move which was expected to trigger a fierce price war with the local players given its lower prices compared to brands sold by foreign and local monopolies operating in the Kenyan market.

The facility in Mombasa once completed will quicken the loading of cooking gas for distribution by trucks which will help to cut demurrage costs.

KPC says faster loading is expected to translate to lower prices for LPG by 30 per cent once operational as oil marketing companies pass the benefits of reduced demurrage costs to consumers.

Oil marketer Ola Energy is also set to expand its LPG import handling and storage capacity to 15,450 tons by next year as it seeks a bigger share of the cooking gas market.

The company currently has an LPG storage capacity of 450 tons at its terminal in Mombasa, with the investment marking a major upgrade of the facility that was built more than 15 years ago.

•The KE-TZ gas pipeline project has the potential to place the EAC at par with West Africa which benefits from an extensive 678 kilometre gas ...
Business
4 months ago