How flowers are 'put to sleep' for long sea voyages

•The flowers will be kept at a temperature of 0.5 degrees celsius throughout the journey, says Elizabeth Kimani, the manager of quality and standards at Sian Flowers.

•As well as controlling the temperature, the atmosphere system in the container reduces the oxygen level from 20% to 4%, while increasing the carbon dioxide level from 0.4% to 4%. 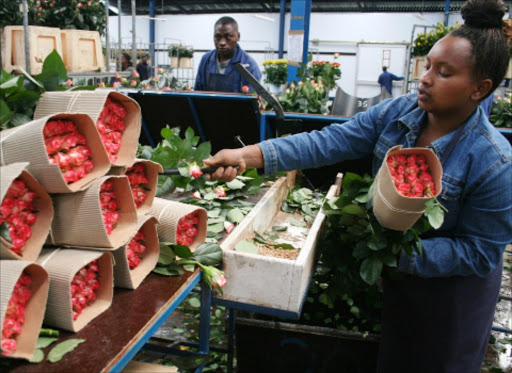 Workers in heavy coats shift boxes of flowers from a cold store into a refrigerated container.

Once packed, these blooms will travel hundreds of miles by road, in a special 'controlled atmosphere' container from Nairobi to the coast.

On arrival at Kenya's biggest seaport, Mombasa, the container is loaded onto a ship for a voyage to Europe of around 30 days.

Despite their lengthy journey, they will still be sold to European shoppers with a vase-life of about a week.

So, how is this possible?

"The flowers will be kept at a temperature of 0.5 degrees celsius throughout the journey," says Elizabeth Kimani, the manager of quality and standards at Sian Flowers.

As well as controlling the temperature, the atmosphere system in the container reduces the oxygen level from 20% to 4%, while increasing the carbon dioxide level from 0.4% to 4%.

This technology is all part of the elaborate process of preserving the blooms for as long as possible.

"Through this [system] you stop all activity in the flowers that, as a result, go into dormancy," Ms Kimani says, explaining that the flowers are put to sleep.

A sophisticated tracking system allows staff from the shipping company to monitor the temperature, oxygen and CO2 levels throughout the journey.

But flowers destined for such a long voyage need extra attention to prepare them, as soon as they are picked.

"We harvest them early in the morning, when it's still cool and they will be the first to go into the cold room," explains Linda Murungi from grower, Sian Flowers.

Freshly-harvested roses, for instance, are then dipped into a chemical mixture to protect them from the fungus, botrytis.

After that, the stems are put into buckets to absorb a hydration solution so they can survive the thirty days without water. They are also put in a solution that curbs the growth hormone, ethylene, which causes the ageing of the flowers.

Once that process is completed, the flowers are then packed into cartons with holes in the top and bottom, which allow air from the container's system to circulate.

Kenya has become one of the world's biggest flower exporters thanks to its equatorial location, high altitudes and relatively cheap labour, it competes for dominance in the market with Colombia and Ecuador.

For years, the two Latin American countries have been exporting about 10% of their flowers by sea freight to North America and Europe.

As these flowers are at sea for a much shorter period of time, firms exporting from Latin America do not use controlled atmosphere, or post-harvest treatments.

Kenyan exporters however, have to be extra-careful. There is no direct shipping route in to Europe, instead, containers are transferred in the Middle East from smaller vessels to much larger ones.

"All processes around sea freight require extreme precision - there's no room for shortcuts," says Jeroen van der Hulst, chief executive at consulting company, FlowerWatch. "One mistake and your flowers might arrive as compost in Europe."

The port of Mombasa has also been known for delays and bureaucracy. Another challenge is it also lacks a so-called 'green line' for perishable products - flowers have to queue up with all the other containers.

Due to these challenges, Kenya's flower farmers have, in the past, been wary of sea freight preferring to transport their flowers by air but shifted during the pandemic.

The farmers saw the price of air freight soar from around $1.80 per kilo, in January 2020, to around $2.80 per kilo in June 2022, according to Harm-Jan Mostert commercial manager for Africa at Royal FloraHolland, the Dutch company behind the world's biggest flower auction.

The transport situation became so difficult that some growers even resorted to destroying parts of their harvest.

"Only this year, more than three hundred containers with ten tons of flowers each have been exported from Kenya by sea", Mr Van der Hulst says. "That's a substantial saving of thirty full cargo aircrafts."

In addition to being cheaper, using sea freight can cut carbon emissions by between 84% and 95% respectively, according to a study funded by the UK government in 2021.

Although, clearly if you are worried about the carbon footprint of cut flowers, then it's probably best to buy a seasonal bouquet grown closer to home.

Pointing at some red roses he says: "This variety, for example, has firmer petals that are less sensitive to botrytis [fungus], which is good for sea freight."

In the future, this could potentially reduce the need for chemicals during post-harvest treatments, although it could take seven to ten years to develop successfully so, "is something for the longer term", he adds.

Many flower producers remain nervous about switching over to sea freight.

"A stupid mistake, a port strike or bad weather at sea can really get you in trouble with sea freight," Mr Letcher explains.

Last year, for example, a container accidentally went to Singapore. "It [eventually] arrived in the Netherlands after 53 days. So, all the flowers had to be destroyed, which was a disaster for the producers," he says.

Growers also need to contend with the perception in the industry that flowers sent by sea freight have a shorter shelf life, particularly at the world's largest flower auction in the Netherlands.

Customers do not notice much of a difference, according to Ms Kimani who says the sea freight blooms are indistinguishable from air freight flowers, adding that some of their roses even travel better by sea, than by air.

"Although air freight only takes around 12 hours, we sometimes witness enormous temperature peaks during the journey...which obviously has a negative influence on the flowers," she explains. "With sea freight, however, our flowers are continuously in dormancy."

The logistics of moving these flowers is not a simple decision, as prices are constantly changing. Shipping prices have also been rising closer to air freight costs.

But in the longer term, Mr Moster forecasts sea freight will account for at least 20% of Kenyan flower exports - a sector worth $934m per year.

"Air freight prices probably will never fall back to the level of before the Covid-19 crisis, so also from a cost perspective sea freight remains interesting," Mr Moster says.

Netherlands to import flowers from Kenya via Lamu port

This is under the MoU signed by the two country's chambers of commerce.
Business
5 months ago
WATCH: The biggest news in African Business
by /BBC
Kenya
05 July 2022 - 04:00