This is partly attributed to Ukraine - Russia crisis which has stoked energy and food prices after hurting the global supply chain. 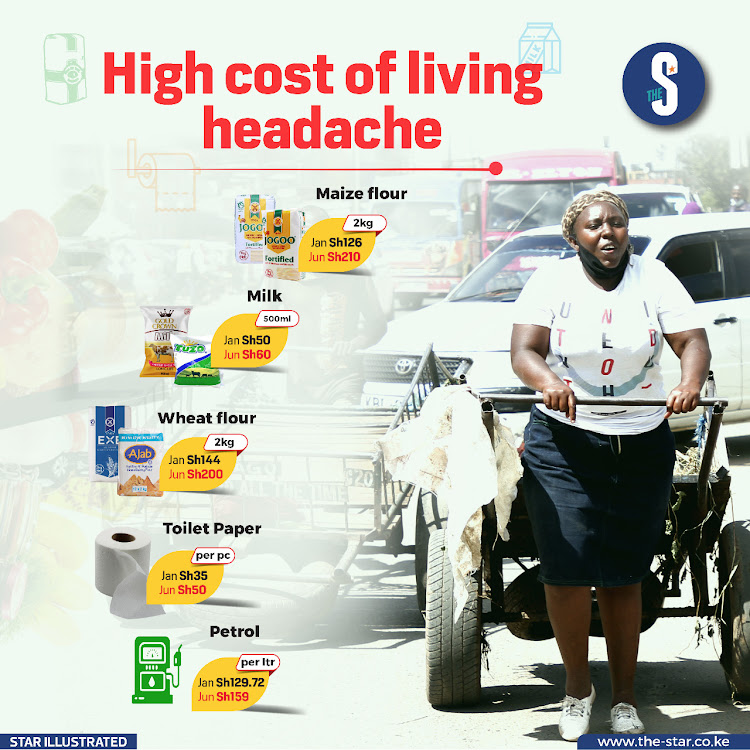 A rise in food prices and transport pushed up the cost of living in June to a two-year high of 7.9, above the government's ceiling by 40 basis points.

Latest Kenya National Bureau of Statistics (KNBS) data shows the Consumer Price Index, a measure of 12 top items in the food basket rose to an index of 124.22 compared to 123.12 the previous month.

The cost of living has been rising on a monthly basis since February, hitting 7.1 per cent in May.

This is partly attributed to Ukraine - Russia crisis which has stoked energy and food prices after choking the global supply chain.

“The rise in Kenya’s inflation was mainly due to increase in prices of commodities under; food and non-alcoholic beverages (13.8 per cent); furnishings, household equipment and routine household maintenance (9.2 per cent); transport (7.1 percent) and housing, water, electricity, gas and other fuels (6.8 per cent),” KNBS said.

The average prices of key foodstuff shot up compared to May, with a two kilo  packet of maize flour rising by over 50 per cent in the past year to trade at an average of Sh213 compared to Sh129.56 last year.

The cost of maize flour, Kenya's staple, has increased by at least 12 per cent since last month.

During the same period, prices of kale (sukuma wiki), spinach, and cabbages dropped by 5.0, 4.1, and 4.0 per cent, respectively.

Upward review of petrol and diesel prices also saw the transport index rise by 0.9 per cent during the period.

A litre of super petrol is now retailing at a record Sh159.12 in Nairobi, and over Sh160 in remote areas. It could be retiling at Sh184.68 were it not for the government subsidy plan.

A litre of diesel, used to power heavy-duty vehicles and machines, is now going for Sh140 in the capital city. Without the fuel subsidy, the pump price of diesel would have been Sh188.19.

KNBS also noted that the housing, Water, Electricity, Gas and Other Fuels Index, increased by six per cent between May and June.

This is, however, not coming as a surprise as the government had projected an inflation rate above 7.5 per cent in the coming months to August.

Addressing a post-Monetary Policy Committee media briefing in May, CBK governor Patrick Njoroge said the inflation rate is expected to rise above the government's ceiling of 7.5 per cent in the coming months on the uncertain global supply of basic commodities.

This saw the apex bank hike the base lending rate by 50 basis points to 7.5 per cent to pump brakes on the economy in an effort to get inflation under control.

"The high inflation witnessed is supply induced. The accommodative policy is aimed to contain the secondary effects of this,'' Njoroge said.

The rising cost of living is not just unique to Kenya. Several developed countries including the US, UK and Germany are experiencing 40-year high inflation.

This has seen President Joe Biden's regime raise the federal rate twice in a year.

A fortnight ago, the federal bank launched its biggest broadside yet against inflation, raising benchmark interest rates by 0.75 per cent in a move that equates to the most aggressive hike since 1994.

The programme is expected to benefit 2.3 million people in the region.
Business
7 months ago

Maize flour prices crossed the Sh200 mark for a two-kilo packet last week adding to the plight of Kenyans.
Business
7 months ago

How much income is enough for today’s needs?

There is no right or wrong choice in personal finances but each choice will either increase or decrease your spending.
Sasa
7 months ago

Is the high cost of living hurting you?

Is the high cost of living hurting you?
Poll of the day
7 months ago
Post a comment
WATCH: The latest videos from the Star
by VICTOR AMADALA Business Writer
Kenya
01 July 2022 - 04:00
Read The E-Paper