The raw materials shall have been imported on or before October 31, 2022. 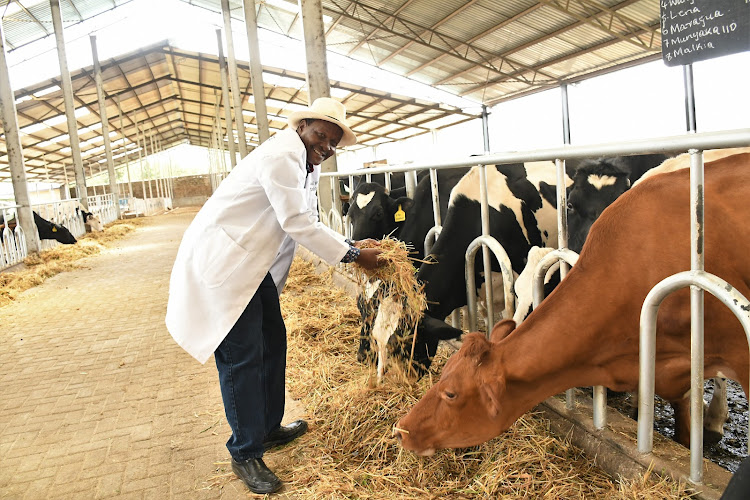 GMO IMPORT BAN: Martin Gatheca a dairy farmer in Naivasha, Nakuru county says he has been forced to reduce the number of his dairy cows from 300 to 150.
Image: AGATHA NGOTHO

Thirty millers have been exempted from duty on imported raw materials used in the manufacture of animal and chicken feed.

It follows a directive by President Uhuru Kenyatta on 8 September, 2021 after he declared drought in parts of the country a national disaster.

A gazette notice dated June 10 noted that all the imports shall be used for the manufacture of animal and chicken feed only and shall have been imported on or before October 31, 2022.

“The exemption from import duty applies in respect of imported raw materials used in the manufacture of animal and chicken feed imported between the 1 November, 2021 and 31st October, 2022 by licensed millers approved by the government,” it said.

Each miller has been given limits and the total imports shall not exceed the respective targets.

The imported yellow maize shall be 99.1 per cent not genetically modified, have a moisten content not exceeding 13.5 per cent and its aflatoxin levels shall not exceed 10 parts per billion (ppb).

Imported soya bean, soya bean meal, sunflower cake, white sorghum or fishmeal shall also be 99.1 per cent not genetically modified and accompanied by a certificate of conformity issued by the Kenya Bureau of Standards.

Last year in December, National Treasury has effected a directive by President Uhuru Kenyatta to remove duty on imported materials used in the manufacture of animal and chicken feed.

Then, Treasury CS Ukur Yatani had allowed 18 millers to import the raw materials duty-free between November 1 and October 31, 2022.

In his address during the 2021 Mashujaa Day celebrations, Uhuru directed the National Treasury and Agriculture ministries to come up with intervention measures to address the high cost of feed.

“To secure a reduction in the prices of animal feeds, I order and direct the Agriculture CS, jointly with the National Treasury, to issue within seven days, a framework that will facilitate the reduction of the cost of animal and chicken feed,” he said.

The ministry of Agriculture had recommended a waiver of duty on yellow maize to allow importation by processors as an intervention to lower the cost of livestock feed.

Other measures suggested included removal of import duty on raw materials like sunflower and cottonseed cakes and leasing of government land for local production of the two products.