World Bank warns of recession risk due to Ukraine war

Energy and food bills have been rising around the world.

•Energy and food bills have been rising around the world. 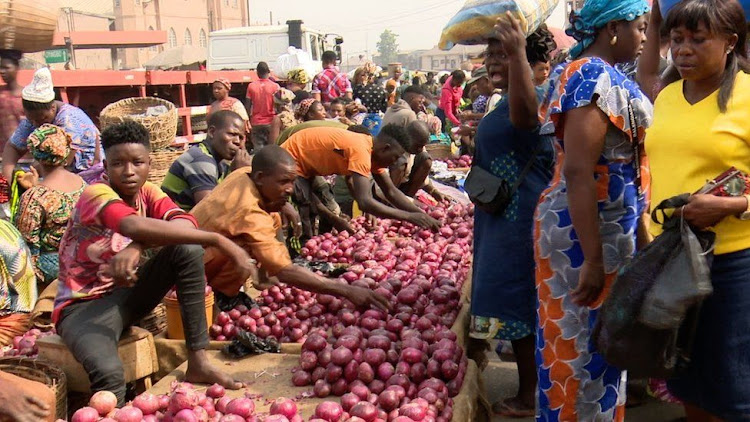 FILE Even the price of everyday items like onions has shot up.

Countries around the world are facing recession as the Ukraine war hits economies already rocked by the Covid pandemic, the World Bank has warned.

Energy and food bills have been rising around the world.

"The war in Ukraine, lockdowns in China, supply-chain disruptions, and the risk of stagflation are hammering growth. For many countries, recession will be hard to avoid," Malpass said.

He also warned in the World Bank's Global Economic Prospects report for June that the danger of stagflation was "considerable".

Energy and food bills have been rising around the world."Subdued growth will likely persist throughout the decade because of weak investment in most of the world. With inflation now running at multi-decade highs in many countries and supply expected to grow slowly, there is a risk that inflation will remain higher for longer."

Also on Tuesday, the World Bank approved $1.49bn (£1.2bn) of additional funding for Ukraine, which it said "will be used to pay for wages for government and social workers."

The new financing is part of a more than $4bn support package for the country, which covers areas including healthcare, education and sanitation.

More than a hundred days have passed since Russia's invasion of Ukraine, but only now is the sobering size of the shock waves hitting nations and households thousands of miles away from that epicentre becoming clear.

Developing nations were already struggling to get back on their feet. For every $20 households there typically earned pre-pandemic, they now only get $19.

But soaring food and energy costs threaten to throw livelihoods further into reverse, spelling misery and hardship for the most vulnerable.

And that's not just true for poorer countries. One survey shows one in six British households have turned to a food bank.

That global struggle could be compounded by the higher interest rates being used to ease inflation, just as government support to ease the impact of the pandemic is evaporating.

The World Bank is urging immediate action, from debt relief, to urging nations not to put restrictions on food exports.

Instead they want policymakers to show they are acting together to safeguard food and energy supplies, reassure volatile markets, and ease price spikes,.

Policymakers have already had to tackle an extraordinary battle.

But if we down tools now the World Bank suggests we could face an even more prolonged and painful crisis.

The countries in Europe that are most likely to suffer a sharp drop in economic output in 2022 are Ukraine and Russia, the World Bank forecast.

But it warned that the fallout from the war and the Covid pandemic would be wider.

"Ehasven if a global recession is averted, the pain of stagflation could persist for several years - unless major supply increases are set in motion," Mr Malpass said.

Between 2021 and 2024, global growth is projected to slow by 2.7 percentage points, Mr Malpass said, more than twice the slow down seen between 1976 and 1979, when the world last saw stagflation.

The report warned that interest rate increases needed to control inflation at the end of the 1970s were so steep that they touched off a global recession in 1982, and a string of financial crises in emerging market and developing economies.

However, in the 1970s the dollar was weaker and oil was relatively more expensive.

Speaking to the BBC, Ayhan Kose, director of the World Bank's Prospects Group said "There is not much governments can easily do" to tackle rising energy prices.

"Those type of interventions distort prices and they translate into even higher prices," he added.

In Kenya, motorists faced another hit at the pumps as government announced monthly retail prices to June 14.

Without the partial government subsidies, consumers would have paid Sh176.47 for a litre of petrol. Diesel would sell for Sh174.94 and kerosene, mostly used for lighting and cooking, would trade at Sh169.26.

The Consumer Federation of Kenya last week said there is little expectation Kenyans will be relieved from the high cost of living any time soon.

Cofek secretary general Stephen Mutoro, in a phone interview with the Star, said consumers should prepare for high costs of food, fuel and other commodities for a while.

"If only 50 per cent of maize inputs were realised in 2021, this year things will most likely be worse because of the high costs of fertiliser and other farm inputs," Mutoro said.

The shortage of maize and wheat is increasing and farmers and manufacturers say this will lead to a food crisis unless urgently addressed.

The Kenya Association of Manufacturers and other lobbyists have said the shortage will steeply drive up the prices of these commodities and further aggravate inflation.

Kenya imports 60 per cent of the grain deficit mainly from Ukraine and Russia where the ongoing war has disrupted the importation supply chain.

"A lot of our food production is fuel-related. This means as long as the cost of petroleum, diesel and kerosene is high, the cost of production and sourcing as well as supply chain will remain high," Murui said.

Why you should brace for higher cost living