Duale, was honored for his role in the financial sector during the Platinum Jubilee beacon- lighting event.

•The services provided by Dahabshiil are particularly vital now, with the worst drought in 40 years ravaging East and the Horn of Africa.

•Coutts invited Duale in appreciation of what it described as ‘the fantastic work’ he has done in the financial sector. 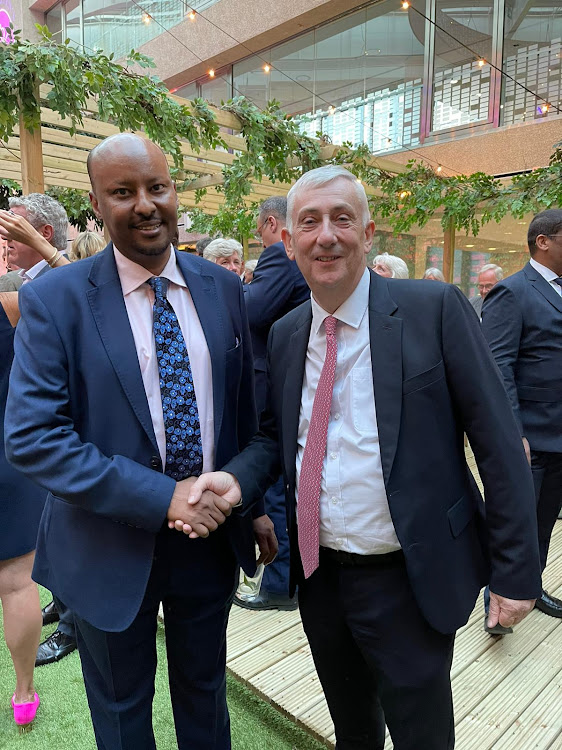 Dahabshiil CEO Abdirashid Duale shakes hands with the speaker of the United Kingdom house of Commons Lindsay Hoyle on the sidelines of the Platinum Jubilee beacon lighting event in London on Thursday evening./HANDOUT

The Queen's bank, Coutts in London  honored the chief executive officer of Africa's global financial firm, Dahabshiil Abdrirashid Duale for his contribution in the growth of the financial sector during the Platinum Jubilee beacon- lighting event.

Coutts invited Duale in appreciation of what it described as ‘the fantastic work’ he has done in the financial sector.

While accepting the honour,  Duale said: “Dahabshiil embodies this spirit."

“From small beginnings, we have built ourselves into a global business, creating jobs and supplying lifeline services whereby African diaspora communities can help their families and invest in businesses back home,” said Duale.

Other African business leaders were also invited to the celebration which was attended by the speaker of the House of Commons, Sir Lindsay Hoyle, the Queen’s personal representative in London, Sir Kenneth Olisa, and the minister for the cabinet office, Michael Ellis.

Ambassadors, religious leaders and other dignitaries were also present.

Members of the House of Windsor, including The Queen and Prince Charles, participated in beacon-lighting events, where fires are lit across Great Britain to celebrate royal events such as weddings and Jubilees.

The Queen and her family have been great supporters of entrepreneurship in Britain and the wider world including Africa, creating trusts to support youth and encourage them to build strong independent lives for themselves through business.

The services provided by Dahabshiil are particularly vital now, with the worst drought in 40 years ravaging East and the Horn of Africa.

People are more dependent than ever on financial support from relatives in the diaspora, especially with such a large proportion of humanitarian assistance going to Ukraine.

The Platinum Jubilee, which was celebrated across Britain and the Commonwealth, showed the unifying force of the 96 year old Queen.

With his global connections, entrepreneurial flair and passion for philanthropy,  Duale embodies this spirit, enabling Africans all over the world to help each other, to trade and invest, and to bring to fruition the best the continent has to offer.

Dahabshiil was recognised for boosting the economy in African nations through remittances from the diaspora.
Business
1 month ago

With operations in Kenya, the two are keen to grow businesses in the region.
Business
9 months ago

Duale says that Africa can no longer be ignored given the growing opportunities in the continent.
News
2 years ago

Dahabshiil Group’s microfinance arm MicroDahab MFI has stepped up support for youths through funding their startups. By so doing, the firm hopes to ...
Counties
6 years ago
by BY OLIVIA ADHIAMBO
Kenya
09 June 2022 - 12:32