The country has employed a strategy specific to this market.

•Kenya projects arrivals to be about 80,000 by close of this year.

•Meanwhile, India is keen to tap more trade and investment opportunities with Kenya, according to its High Commission to Kenya Virander Paul. 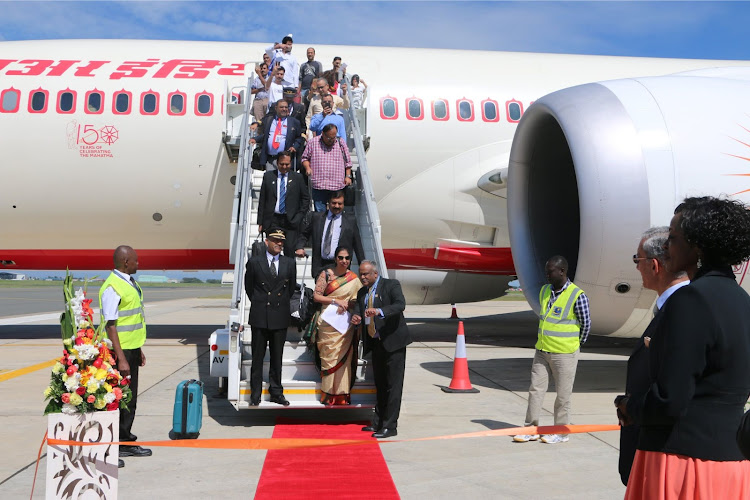 Visitors arrive at the JKIA onboard an Air India plane when it resumed flights to Nairobi, in November 2019, after a 10 years hiatus/FILE

India has been one of Kenya's major trading partners since independence in 1963, with bilateral trade between the two nations growing steadily over years.

The contemporary ties between the two countries have evolved over years into a robust and multi-faceted partnership, marked by regular high-level visits, increasing trade and investment as well as extensive people to people contacts.

It is Kenya’s second biggest import source after China, as the Asian market accounted for 65.7 per cent of the country’s total import bill last year.

Last year, imports from India were valued at Sh230.9 billion up from Sh188.6 billion the previous year, the Economic Survey 2022 by the Kenya National Bureau of Statistics indicates.

The relationship between Kenya and India however goes beyond trade with tourism being a key part of the two countrys’ ties.

The Asian country is among the top five market sources for Kenya’s international tourists.

This means without the East African Community (EAC) neighbours, India was the third top source outside Africa.

The Indian market will continue to play a significant role in the recovery of Kenya’s tourism sector, sector players in Kenya have said.

According to the Kenya Tourism Board (KTB), the growth in numbers can be attributed to Kenya’ continued investment in the India market.

This is through marketing campaigns as well Kenya’s conformance to the Covid-19 protocols, that provides assurance to travelers of their safety while in the destination.

Speaking over the weekend, during a dinner held to receive visitors from India at the Nairobi National Park, KTB chief executive Betty Radier said the board will continue to market Kenya in India, and that she was optimistic of further improvement by the end of the year.

“We are seeing a lot of interest from the Indian market and we want this to continue, this is the reason we have employed a strategy specific to this market which is slowly evolving to be a key source market for Kenya,” Radier said.

“This year, we already have a 55 percent improvement compared to last year during this period. We anticipate that we shall see about 80,000 travelers from India by close of this year, which will be a major coup bearing in mind how India was hit by the pandemic” said Radier.

The visitors were the second batch of an incentive travel group from Reliance Industries (RIL’s), an Indian multinational conglomerate company, headquartered in Mumbai.

The first group arrived in the country three weeks ago and has so far visited attractions in Nairobi and the Maasai Mara.

“We are happy to see more visitors coming in from India, three weeks ago we had a group of around 150 people coming in and today we are hosting a similar number,” she said.

The main purpose of visit by Indian travellers to Kenya is a combination of business and leisure, which KTB says “Magical Kenya” has a lot to offer.

The lead marketing body intends to use the visits to showcase the destinations preparedness against Covid-19 as the group samples the destination Kenya.

The resumption has had a positive impact on travel between the two countries.

In 2019, India’s flag carrier Air India relaunched its direct flights to Nairobi, a move that sought to boost tourism between the two countries.

The airline had earlier stopped operations on the route for eight years due to low volume of business.

Destination Management Company (DMC) Safari Trails CEO Rajay Thethi, says: “Kenya is an important destination for Indian visitors with Kenya having a big Indian community. The decision to remove PCR testing and resuming daily flights to India has been key in attracting the visitors to this market.”

Theti notes that Indians are interested in wildlife hence the high number of photographers from India who have come to Kenya for the farm trip.

“This group shall be visiting attractions in Nairobi and Maasai Mara” Thethi said.

Meanwhile, India is keen to tap more trade and investment opportunities with Kenya, according to its High Commission to Kenya Virander Paul.

It is the second largest investor in Kenya, according to the Kenya Investment Authority (KenInvest).

There are over 60 major Indian companies that have invested in various sectors including manufacturing, real estate, pharmaceuticals, telecom, Information Technology, banking and agro-based industries.

Indian investments have resulted in creation of thousands of direct jobs to Kenyans with pharmaceutical companies having a substantial presence in Kenya.

A bilateral Double Taxation Avoidance Agreement (DTAA) was signed in 1989 with a revised DTAA signed in July 2016 and came into force on 30 August 2017, easing FDIs.

Most of them are in Europe.
Business
5 months ago
WATCH: The biggest news in African Business
by MARTIN MWITA AND SHARON MAOMBO
Kenya
07 June 2022 - 11:00